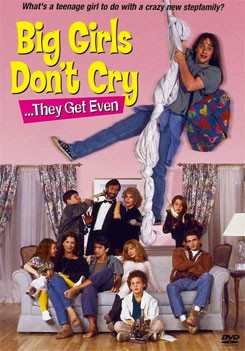 Big Girls Don't Cry... They Get Even

Through numerous marriages and divorces, this movie portrays the end product of many Stepkids.

The story is told by Laura, one of the middle children, living with her mother and "new" father. Not being understood by her parents she runs off to live with her stepbrother, although without his consent. When her parents (all three sets of them!) come to take her back home she flees again, out into the wilderness. Before Laura returns, all of the parents have come to terms with each other and learn to give all of the children the respect and understanding that they have needed.

The animal action is very mild throughout the picture. However, there is a scene where an intoxicated man comes out of his trailer and yells at his dog to stop barking. He then smacks the dog on the hind quarters and face with a folded newspaper. While this looks bad in film, the trainer was merely roughhousing with the dog, named Louie. This is the type of play Louie is accustom to and enjoys. He was never harmed.

In one scene Laura's mother is chased by a bee. She gets into the car and the bee goes in through a cracked open window. At this point we are looking through the bee's eyes as he goes right to the womans face and supposedly stings her on the nose. This scene was shot in cuts. The bee and the woman were never in the car at the same time and the woman is never actually stung. Five different bees were used and they were released after the scene was completed.

While two of the stepbrothers are searching for Laura they come across a rattlesnake which is coiled and ready to strike. One of the boys goes up behind the snake, grabs it by the tail and hits it on the ground until it is dead. This scene was shot in cuts. The real snake was used for close ups. A road kill was used when the boy picks up the snake and a rubber snake was used when the boy hits the snake on the ground. Other Animal action was background consisting only of two horses standing in a stable.