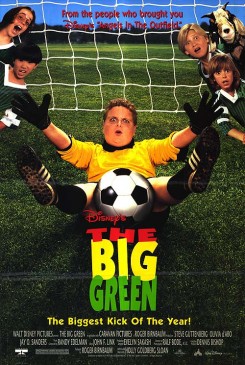 Our story takes place in a quiet little town of Elma, Texas. Anna Montgomery is a British lady who has, by means of a foreign exchange program, been assigned to teach the older children at the local school for one semester. As she is first driving through town, she meets some of the children in a most peculiar way. Four of the older boys ride their bicycles from town to the Big Green, a local recreation center which hasn't been used in a long time. When the boys arrive, they are carrying a huge bag of Cheetos. One boy opens the bag and sprinkles the Cheetos all over the other three boys who are already lying down in the grass. Then he lies down next to them and sprinkles the remainder of the Cheetos on himself. A few seconds later, one of the boys excitedly says "Here they come!" at which point approximately a dozen pigeons swoop down on the boys and begin pecking the Cheetos off of them. When Anna drives by, she mistakenly assumes that the boys are being attacked by pigeons, gets out of her car and grabs a water hose nearby. She runs over with the hose and starts spraying the boys and the pigeons with water. The pigeons fly off, but the boys are soaked and get up and start screaming at her for spraying the pigeons and ruining their fun. The next day, Anna meets the rest of the class including the four boys she had met the previous day. The entire class consists of only twelve children of different ages. The children are not particularly the most intelligent kids around, but they're not stupid by any means. They proceed to tell Miss Montgomery that there is no use trying to teach them, because they're just not bright enough or interested in school. One girl says she is just going to work at her mother's beauty salon, so she really doesn't need to know about geography or math. The other kids have similar attitudes. Finally, Anna takes all of the kids outside and starts to teach them to play soccer, which they say can't be done. After the first day with Anna's help and the local sheriff, Tom's coaching, the kids really get involved. They're told that if they study first in the classroom, they can play soccer after school. Sheriff Tom signs them up for a league, and they start traveling to Austin to play different Texas teams. They name their team The Big Green. By the end of the season, the kids have their own uniforms and win the soccer league championship.

The scene where Anna mistakenly thinks the boys were being attacked by the pigeons, was filmed in cuts. First, the pigeons are seen circling the boys from above. Then they descend on the boys. The birds were Los Angeles pigeons that had been trained for the stunts with the boys. Bird seed was scattered on the boys with the Cheetos, so the birds were actually going to the bird seed. The boys had been prepped for the scene and were comfortable with the birds. No bird seed was placed on the boys' faces so there was no danger of the birds pecking at the boys' eyes. The scene where Anna sprays the birds and the boys, was also filmed in cuts. We see Anna running toward the birds and the boys and then we see her aiming the hose at them. However we never see the water actually spraying the birds. In actuality, the birds were not near the water and were not sprayed.. The next scene is the birds flying away. They were trained to fly off to a box containing bird seed. After filming, the birds were returned to Los Angeles where they have appeared in other films. Throughout the film Polly, one of the girls, walks around with her pet goat, Ernie. The only place that Ernie isn't allowed is the classroom. Occasionally, while Ernie waits outside for Polly and her friends, he gets bored and starts eating paper, presumably from homework left outside. Ernie did not have to be trained to eat the paper as goats will eat anything. There was a scene in which Ernie rode in Anna's convertible. He did not have to be trained for this either as he loves to ride in cars. There was a scene in which Ernie runs around the track with the kids while they are in training. In actuality, the goat loves to run and in particular enjoys running with others. In another scene we see Ernie playing soccer with the kids. We see Ernie run to the ball, kick it and then run after it. This scene was filmed in cuts. Two artificial legs were made and used for the kicking of the ball. First, we see Ernie run up to the ball, then there is a cut to the artificial legs. Ernie also attends all of the soccer games as their mascot. Ernie lies down in one of the scenes at the soccer game. The goat was trained to lie down with either bananas or raisins as his reward. The only other scene showed Ernie with green fur at the last soccer game of the season. A non-toxic dye was used. After the scene, the trainer was able to shampoo the color out of Ernie's fur with no harmful affects.