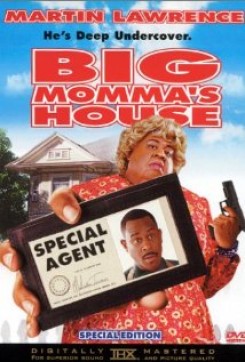 Big Momma's House is a comedy about an FBI agent who goes undercover to catch an escaped murderer. He believes the crook will try to locate his ex-girlfriend, Sherry, and that will prove the strategy for his capture. Unfortunately, Sherry goes to hide out at the home of her grandmother, the very obese "Big Momma". As the bait is about to arrive in the trap, Big Momma decides to take off to visit a friend. This leaves the FBI agent, Malcolm Turner, impersonating Big Momma to stake out Sherry.

As the movie opens, we get to watch an FBI sting operation at an illegal dog fighting ring. The dogs are led into the ring with gambling crowds surrounding the fighting pit. As the fight is about to begin, the feds spring into action. For this scene, there was no actual dog fighting allowed. Two Pit Bulls are paraded around the ring on leases and filmed being released separately. As the chaos ensues, the dogs appear to chase a man and also to knock him over. The dogs actually responded to cues from trainers, many of whom were dressed as extras for added safety. The dogs genuinely chased the actors to get hot dog treats that the actors carried. During the fray, a man is locked in one of the cages with a Rottweiler who promptly licks his face. At no time during filming, was there any aggression, only play behavior, from the dogs. Not just big dogs are in Big M omma's House. One of Big Momma's neighbors is seen throughout the film with her little pug dog. Sometimes she is walking it on a leash, another time it is in a basket and then there is the time she and her dog chase the FBI. In one scene the dog appears to be picked up and tossed over the fence and then runs away. The dog is wearing a sweater and the actor is actually lifting the dog by a harness that is hidden under his sweater. The dog had been conditioned in pre-production to wear the harness and be lifted by it. When the dog is seen being hurled over the fence, a fake dog was used. In the scene where Malcolm and Sherry take her son fishing, only fake fish and worms were used.