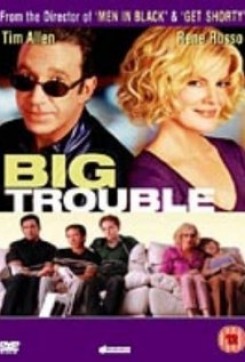 A farce based on Dave Barry's hit novel of the same name, Big Trouble follows several confused and eccentric Miami-ites as they try to sort out a mystery involving a bomb-threat, a senior theme park named the Denture Adventure, and "killer" squirt guns.

Spawned as the result of generations of nasty, unplanned dog sex, poor Roger the dog is terrorized by an unruly toad. Following Roger's memorable introduction, Roger intently stares at the aforementioned toad sitting on top of a food bowl. The toad proceeds to squirt Roger in the face. The dog had several rehearsals with the animatronic toad to ensure his comfort, and was also acclimated to the squirt, which was a mixture of milk and water. After Roger's scene was finished, the trainer retrieved the dog and gave him a Calgon-worthy bath. Never one to hold a grudge, Roger later eats from a bowl while the toad does the same next to him. A trainer put some of Roger's favorite treats in both bowls and the dog stood by the bowl and ate as the trainer stood off-camera.

Roger had several scenes where he sniffed the nether-regions of certain actors. It goes without saying that Roger had much more fun filming these scenes than the actors did! To achieve the action, a small piece of material was shown to the dog and then taped in the actors' private area. One trainer released the dog and verbally cued it to retrieve the piece of material.

A content cat lies on a wall as a character named Puggy (Jason Lee) pets it. The trainer put the cat on its mark and the actor merely stepped in and began to pet the cat. Although the cat wanted to remain right where it was after the scene was over, a treat-wielding trainer finally persuaded the idle feline to leave.

One running gag in the film involves some unlucky yet resilient goats. While driving, Eliot inadvertently hits a goat that is in the middle of the street. The goat hits the windshield of the car, flies up in the air, then comes back down onto the street on all fours and walks away. The goat was filmed standing in the middle of the street—no other was action required from the live animal. The goat that hits the windshield was actually a stuffy. The street was closed off to any traffic and trainers stood off-camera after placing the goat on its mark. In another scene, a truck with several goats inside crashes! Not to fear, the truck was actually empty during the crash sequence. The goats were placed inside a stationary truck while a hidden trainer pushed the door open, letting the goats wander out. Trainers and crew members stood off-camera in case any goats decided to wander too far! When the goats are shown wandering around by the cars, the trainers released them and the cars stood still. The cars were filmed moving in a separate shot and the two scenes were brought together later in the editing room. For another scene, trainers released several goats, which wandered around on a railroad track. The tracks were closed off to all trains and trainers and crew members surrounded the set so the goats would stay in one place. Food was scattered on the ground to further keep the goats contained to the area.

In the beginning of the film, a Dalmatian dog with some pups in a cage sits on a luggage carrier truck. The trainer secured the cage to the truck and put the dogs inside the crate. Later, a small dog rests inside of a woman's shoulder sack. The trainer placed the dog inside the sack and made sure that it was comfy and not cramped. The trainer stood off-camera and retrieved the dog after the scene was completed.