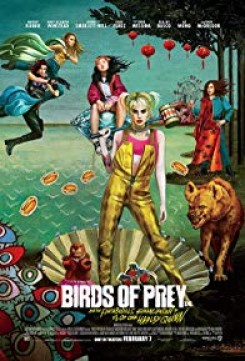 After Harley Quinn breaks from The Joker, she joins a group of crime fighting women.

In the scene where Harley Quinn walks into a pet store and sees a pig and hyena in their cages, the set consisted of a wood floor, high ceilings, and glass window storefront. The set was decorated with taxidermy animals, stuffed animals in cages, and live animals. The animals were loaded, one by one, into their enclosures. There was avulture on a wood perch;  a pig was housed in a wire cage; a python and lizard in a tank; a dog and cat also in cages; a capuchin monkey in wire cage; a parrot with a perch; and a fox.

When we see Harley Quinn in her apartment with her pet hyena on the ground, the set was inside a private training facility. The hyena was kept inside its own holding pen and was fed his regular evening diet by his trainers.  He was given long breaks without crew near him between being recording takes.

When we see her in the car with the hyena in the backseat, a dog was used in the scene. They changed the dog to look like a hyena in post.