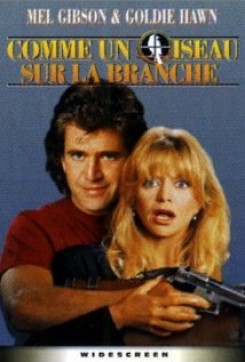 Birds On A Wire

Bird On A Wire is a romantic comedy adventure. Rick is in the witness-protection program, after naming a drug lord who is convicted and sentenced to jail. When the drug lord gets out of prison he locates Rick by way of a corrupt government agent. About the same time he runs into an ex-flame, Marianne, now a lawyer. Their reunion is short-lived when they're ambushed by the crooks. They manage to escape and what follows are some wild chase scenes and an exciting climax staged in a zoo setting.

The crooks ambush the pair again by helicopter while they are seeking refuge on a farm. There is much gunfire around the animals which was accomplished by setting off small squibs electronically that stirred up the dirt. There was no sound. The loud gunfire was added to the soundtrack later. The helicopters were higher than they appeared to be. The closeness was achieved via camera angles. The couple who owned the cows would hold up hay or feed and call to their cows to get them to move to a certain area. For the climactic zoo sequence, the production company constructed a natural habitat/rain forest set on the immense Canadian stage. A wide variety of animals appear, such as jaguars, lions, tigers, chimps, baboons, exotic birds and alligators. When a lion attacks a villain, the lion was actually greeting and jumping on a stuntman who the lion was accustomed to playing with. Later, a dummy replaced the stuntman, when the villain's body is supposed to be mauled. When two Siberian tigers battle each other after one is released into the other's cage, they are actually playing together as all the tigers got along very well together. Another villain meets his demise in an aquarium full of piranha fish. Piranha were replaced with another species that look similar, but are harmless. A dummy was placed in the tank first to familiarize the fish with it so that they would not panic during filming. Mechanical fish were also used.