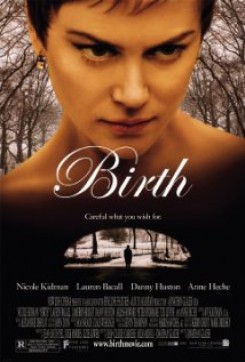 Nicole Kidman stars as Anna, a young widow finally getting on with her life after the death of her husband. As she is about to remarry, Anna meets a 10-year-old boy (Bright) who claims to be her deceased spouse Sean, reincarnated. Though his story is both unsettling and absurd, Anna can't get the boy out of her mind. To the dismay of her new fiancé, Anna's increased contact with the child causes her to question many of her life choices.

In one scene, Sean jogs through Central Park and a few dogs cross his path. A trainer released the four dogs and they ran to an awaiting trainer who rewarded them with treats. Viewers may notice other people walking dogs on leash in the background. These people happened to be in the park during production and were filmed acting naturally by the cameraman.

The horse-drawn carriage transporting Anna and Sean through Central Park was provided by a carriage company that does tours for park visitors.

In one brief shot, a cat walks across the table and jumps down. A trainer put the cat on its mark and the animal walked to a second handler who was waiting with a treat.