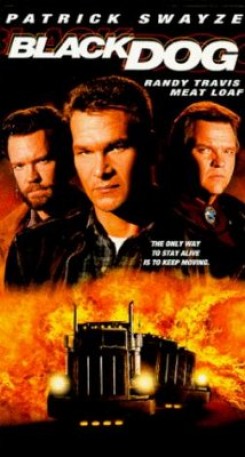 Black Dog is a high-speed chase film involving gunrunners and big rig trucks. An ex-con takes a job driving cargo only to find out that the cargo includes illegal assault weapons. In an effort to save his family, who is being held hostage, he must outwit the crooks and dodge the FBI. He must also fight a common truckers' hallucination called "black dog" which frightens drivers off the road and leaves behind death and destruction.

The truck carrying the illegal guns is home to a black pit bull named Tiny. The dog is seen several times growling and barking when the back of the truck is opened. The trainer placed the dog on a mark and used both verbal cues and food rewards to get the dog to bark and growl. After a final chase scene, Tiny is petted and cuddled by the driver's daughter. While the chase is happening, the girl is in the cab of the truck holding the dog by the collar. This sequence was shot in cuts and the dog was never in the stunt truck while it was smashing into things. Although it is assumed throughout the film that the dog is in the back of the truck, the animal is never present when dangerous stunts are performed. When the hallucination scene was filmed, a black Rottweiler was used. The driver begins to fall asleep at the wheel as a result of long hours and monotonous, rainy, night driving. As he struggles to stay awake, he imagines he sees a black dog running toward his truck and leaping up at it. To fight his demon, he drives right at the oncoming dog, rather than veering off the road. It appears as if he has hit the dog head on and shattered the hallucination. The scene was shot in cuts and the dog was coated in glycerin to make it appear very wet. Trainers released the dog while using verbal cues to get it to run approximately 15 feet and leap over the special effects camera and onto a padded flatbed truck. A rain machine was used to create the illusion of dangerous road conditions and the special effects in post production enhanced the illusion of impact.