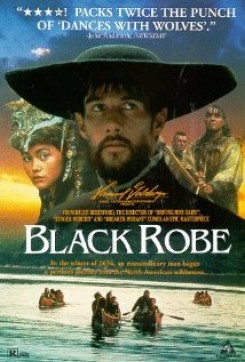 This movie, set in Quebec in 1634, is the story of how the Jesuit priests try to civilize the untamed Indians and turn them to Christianity. This is the story of one priest in particular, Father LaForga, along with his companion, Daniel, and how they make their way across the treacherous mountains to reach the Hurnon mission. They endure many hardships. Rough terrain and freezing weather are the minimal hazards in this journey, in comparison with the savage Indians they must protect themselves against. Some of the Indians believe that the "Black-robe", as they call the priests, are demons sent to capture their spirits. Enroute to the mission, Daniel falls in love with one of the Indian girls and becomes part of their tribe. This leaves father LaForga to go on to the mission alone and face whatever he might find left of the parish.

In one scene several Indians are scouting through the forest for their dinner. One Indian stops, takes aim, and fires an arrow through the air, hitting a Pheasant, which plummets to the ground, dead. This scene was shot in cuts. A real pheasant is seen flying through the air, then a dead pheasant, purchased from a restaurant, was thrown into the air with an arrow though it. The dead pheasant was filmed as it was falling back down to the ground. When the hunting party returns, one Indian has a dead deer draped around his neck. The deer was purchased through Fish and Game from a game dealer. In another scene, as the Indian chief is having a dream, we see a moose skull attached to the top of a post in a burial ground. The moose skull was provided by the prop department. In a scene where the Indians have decided to leave Father LaForga behind to fend for himself, they give him a dead bird with which he can make himself a meal. According to the production company this bird was also purchased dead. There are also German Shepherd dogs seen throughout the movie as pets in the Indian tribes and riding in the canoes when the tribes relocate. Also a Raven is seen flying through the sky.