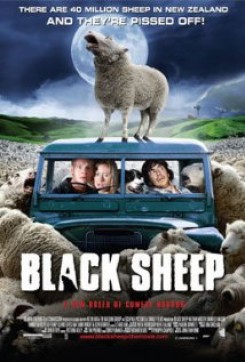 Black Sheep is a comedy about two brothers. The elder brother, Al Donnelly, is running for governor in the state of Washington and the behavior of his younger brother, Mike, is a constant source of embarrassment. Mike wants to help his brother win the governorship and tries to help in his loving, but bumbling way. In an effort to do so, he drives a truck with a loud speaker attached through town, blaring out slogans for his brother's campaign. All the truck attracts are dogs who respond to the noise of the speaker by barking incessantly. While trying to get away from the dogs, Mike runs the truck onto the sidewalk, crashing in front of the theatre. Al is speaking at a political rally closeby and the news of his brother's antics are quickly related to him. He is wise enough to know that, dear as Mike is to him, he is a handicap to his campaign. Steve, one of his campaign workers, is, therefore, assigned to be Mike's baby-sitter and to find him something harmless to do. After Mike unsuccessfully tries telephone canvassing, Steve is told to just keep Mike out of the way and out of trouble. A cabin in the woods nearby is provided for this purpose. Meanwhile, the election is held and Al loses the election to the incumbent female governor, Governor Tracy. She used dirty tricks in her campaign to discredit Al through his brother. She had her thugs set fire to the school building Mike worked in, making it appear that Mike was at fault. When this is discovered, Mike is cleared of any responsibility for the arson. Indeed, after the election, Mike becomes a hero when he discovers that there were more voters than residents. It seems that even people in the graveyard were counted as voters for the incumbent governor. This scandal voids the election and another election is held in which Al wins. As Mike sees Steve, his brother Al, and the governor's campaign staff off at the airport, he gets his jacket caught in the door when the plane takes off. The plane flies away with Mike also on the plane, the outside of the plane.

A mixed variety of dogs were seen twice in a pack running behind Mike's truck at the beginning of the film. This was accomplished with trainers positioned in different areas. The dogs, responding to voice comands, each went toward his/her own trainer. Four trainers also rode in the back of the truck. In the scene where Mike and Steve arrive at the cabin, they encounter a bat and chase it in an effort to get it out of the cabin. For this scene, a mechanical bat was used. A bucket of black snakes is also seen briefly, and later a raccoon is seen digging in the grass. Quick shots of deer and a flock of birds are also seen. This was stock footage.