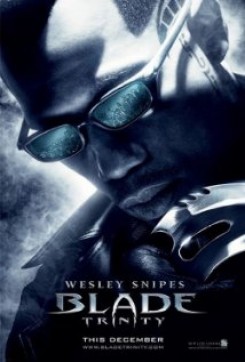 For years, Blade (Snipes) has fought against vampires under the cover of night, with the world above unaware of the brutal ongoing war. But now, after landing in the crosshairs of the FBI, he is forced into the daylight and driven to join forces with a clan of human vampire hunters he never knew existed - the Nightstalkers. Together with Abigail (Biel) and Hannibal (Reynolds), two deftly trained Nightstalkers, Blade follows a trail of blood to an ancient creature that is hunting him ... the original vampire, Dracula.

During one chase sequence, Blade runs through an apartment building and passes a man with a large dog on a leash that begins to bark and growl. After handing the leash to the actor, the trainer stood just off camera using hand signals to elicit the desired action. Computer-generated (CGI) birds fly past Blade as he runs in and out of several other buildings.

In one scene, Hannibal is confronted by a "vampire" Pomeranian that just stands and stares at him. Soon two Rottweilers appear — also in vampire form — and the three dogs chase Hannibal, then crash through a large window and plummet several stories to the ground below.

This scene was accomplished in multiple takes, and CGI effects exaggerated the dogs' mouths to create the vampire look. For the chase sequence, trainers positioned each dog on mark and verbally cued the action while standing just outside the camera frame. Production filmed the window crash against a green screen. The dogs wore specially designed harnesses, were prepped extensively, and rehearsed at length to get comfortable jumping through the candy glass window pane.

For added safety and comfort, crew members covered the floor with padding for the dogs to cushion the dogs' landing, and each dog was filmed separately going out the window. Several cameras were positioned around the set to get various angles and views of the action. The three dogs were well acquainted and had no problems performing together in this scene.