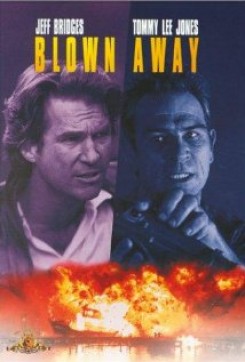 Blown Away is a suspenseful crime drama about James Dove, a member of Boston's Bomb Disposal Unit, who matches wits with a renegade I.R.A. terrorist and explosives expert, Ryan Gaerity. After yet another episode of saving a victim's life, while nearly losing his own, Dove is ready to quit his high-risk line of work to settle down with his girlfriend, Kate, and her daughter, Lizzie. However, after his wedding to Kate, he is drawn back into his job when fellow bomb squad members die in a series of ingeniously executed, major explosions. Gaerity toys with Dove, taunting him with clues and threats, as he escalates his handiwork, killing Dove's uncle and going after Kate and Lizzie, in his quest for revenge against Dove for causing his imprisonment, years earlier in Ireland.

Simple animal action includes dogs on leashes walking with bomb squad personnel, Dove's dog, Boomer, stepping on a bomb squad trainee's foot as part of a training exercise, then exiting from the room with Dove, Boomer lying on Lizzie's bed with her as Dove kisses her goodnight, three different shots of pigeons in a cage outside of Dove's uncle Max's home. One scene has Gaerity playfully pushing two pigeons from their perch with a toy, rubber tipped arrows, causing them to fly off the perch. In these simple scenes, the trainers positioned the animals as required and, where necessary, gave verbal and hand signals, rewarding with food. In Boomer the dog's first scene, he is riding on a motorcycle with Dove for approximately seventy feet. The speed of the motorcycle was slow and the dog was secured on specially built plates as well as cradled between the arms of the driver to insure his safety. Another scene has Dove coming home to discover that Boomer has been killed by Gaerity. A follow-up scene shows Dove burying Boomer in a grave. For both scenes, a fake dog was used. In a scene on the beach where Gaerity is in disguise talking to Kate and Lizzie, he pulls two crabs out of a bag and holds one in each hand, playing like they are talking to each other. In a night scene, Max, Dove's uncle, releases a fish from his fishing line and sets it back into the water. For this, they used live fish that were kept in an aerated tank. A barbless hook was used on the fishing line. Each fish was used for just one take and was out of the water for less that ten seconds. They came from a restaurant and would have been sombody's dinner. However, after filming they were released into the harbor from whence they came.