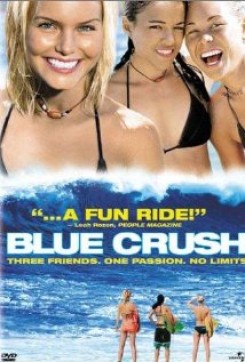 In Blue Crush, Anne Marie's (Kate Bosworth) pro-surfer dreams appear to be swallowed by the pipeline when a different kind of crush, a handsome tourist named Matt (Matt Davis), distracts her training. Another distraction comes in canine form, as Winnie the surfer pooch makes an unforgettable cameo catching some waves at the beach.

When she's not stealing scenes in major motion pictures, Winnie, a 3 year-old black lab mix, loves to catch the clear blue Hawaiian waves of Makaha with her owner. Not an actor by trade, Winnie just happened to catch the eyes of the Blue Crush producers when she came with her owner to an extras casting call one day. The producers were so impressed by Winnie's surfing skills that she made it to the final cut of the film!

Winnie has been surfing since she was given to her owner as a puppy, and she currently has three other canine surfing siblings. They all make it out to the beach to swim almost everyday, keeping to the smaller waves when it's time to surf.

A school of sharks swim in the ocean and during the end-credits, cast members swim with a sea turtle. Both the sharks and the sea turtle were filmed in their natural habitat and were not animal actors.

American Humane Association did not directly supervise the surfer pooch and other animals in Blue Crush, but obtained information from the distributor and production regarding the animal action after screening the film. AHA is rating the film Believed Acceptable based on this information.