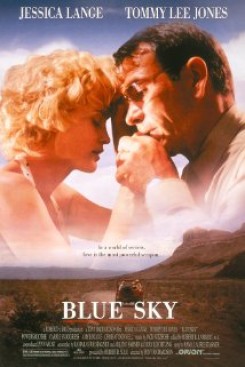 Set in the 1960's, Blue Sky is the name of a secret experimental project which has the Army detonating nuclear bombs underground in the desert. Major Hank Marshall is a family man working on the project. His beautiful wife, Carly, is an exhibitionist sex-pot. Hank tolerates Carly's affairs because he loves her. When Colonel Vince Johnson has eyes for Carly, he assigns Hank to two weeks in the Nevada desert so that he can make a play for Carly. While Hank is at the Blue Sky location, an incident occurs in which the Army tries to cover-up an accident where civilians are exposed to radiation. This doesn't sit well with Hank, and when he returns home to face the fall-out from Carly's affair with the Colonel, he decides to blow the whistle on the nuclear fall-out.

The nuclear accident involved two men on horseback riding in a restricted area when the nuclear explosion occurs. This scene was shot in cuts showing the horses and riders separately. They were never exposed to any explosion nor,of course, to any radiation. In another scene Carly rides a horse into the restricted desert area to attract media attention and thereby help her husband. In any other animal action the animals were mostly atmosphere.