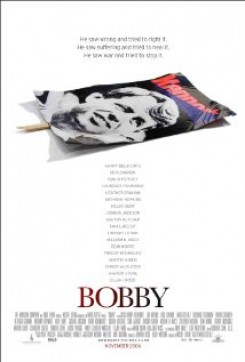 This compelling biopic written and directed by Emilio Estevez centers around 22 people present at the Ambassador Hotel on June 6, 1968, the day that U.S. Senator Robert F. Kennedy was assassinated. Social issues of the day, including ethnic and class differences, and gender inequality, are explored against the backdrop of this historic evening.

When the Ambassador Hotel is evacuated in one scene, singer Virginia Fallon (Demi Moore) poses for some photos out front while her husband Tim (Estevez) watches and holds their pet dog in his arms. When the photographers have finished, Virginia takes the dog in her arms and hugs and kisses it. The Fallons' dog reappears in other scenes in the film. In one sequence, as Tim walks the dog through the hotel lobby, the dog jumps up on a sofa to be petted by John Casey (Anthony Hopkins). Later, on the hotel grounds, Tim throws a ball for the dog to catch and a television set thrown out of a window lands with a crash nearby. Tim also carries the dog out of the hotel in a pet carrier towards the end of the film.

A terrier mix named Puppet played the part of Tim and Virginia's cherished pet. All relevant cast and crew were introduced to the dog before filming and instructed on how to interact with him. Estevez and cast members scripted to interact with the dog were very accommodating. According to field reports generated by the Certified Animal Safety Representative monitoring the production, these individuals took time out each day to hold and pet Puppet, as well as rehearse the scenes that involved the dog, to make sure that Puppet felt comfortable with them and the action. Actors also carried the terrier's favorite treats in their pockets, a fact which the dog discovered very early during filming.

Two trainers stood off camera at all times using a combination of hand signals and verbal cues to get Puppet to stay, look and walk in certain directions as the scene required. Since "fetch" is Puppet's favorite game, getting the dog to play with Estevez on camera was not difficult. The television set thrown out the window was a prop and did not land anywhere near the dog or the actor. Puppet was accustomed to being transported in the dog carrier, which had a front cover made of Plexiglas with holes for airflow.

Ashton Kutcher has a cameo role in the film alongside a flame point Siamese cat named Poppy. The cat is first seen in Edward's (Kutcher) apartment, watching as he and two other men are about to take LSD. When Edward later hallucinates, Poppy stands in a litter box and Edward photographs the cat. Poppy was introduced to cast and crew before filming began. In both scenes, the trainer put Poppy on a mark and stood off camera using hand signals to get the cat to stay.