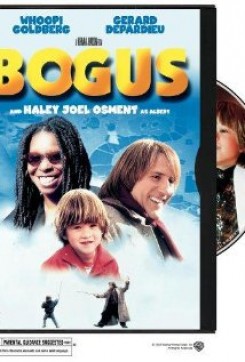 Bogus is a film about Albert, a seven year old boy, recently orphaned after the death of his mother, Lorraine. Albert and Lorraine were living in Las Vegas where she danced in a chorus line. In her will, Lorraine named Harriet, her African-American foster sister, to be Albert's legal guardian. Harriet is saddened by the news of her friends' sudden death, but the sadness turns to shock upon being informed that she is the legal guardian of a seven year old white boy. Harriet finally accepts responsibility for the child after hearing that the other alternative is to turn him over to child welfare. Albert's friends, some of them from a Las Vegas circus act, put him on a plane for New York, to start a new life with a stranger. While on the plane, Albert conjures up an imaginary friend named Bogus. He becomes Albert's constant companion, helping him through the difficult transition of life with Harriet. Bogus is actually an otherworldly being who helps lonely people to cope with life and find happiness. Only this time his task is to protect Albert and, at the same time, work on the indifferent Harriet. Bogus must make her realize that she needs and wants Albert as much as he does her. When his task is complete, Bogus moves on to other people who need his services.

In the opening scene, a flock of doves are seen flying around a woman as she floats through the air. It is actually Mr. Antoine, the master illusionist at a Las Vegas showroom performing with his wife, Babette. Babette is floating through the air as the doves fly above and below her. The doves were professionally trained magician doves. These particular doves were trained to fly around a floating object. There is a scene at Lorraine's funeral, where Mr. Antoine reaches his arms up towards the sky and produces a white dove. Its wings flutter and then it flies away. A trained, magician's dove was used for this scene. The trainer sat on the ground directly below the actor. He placed a small harness on the dove with a monofilament string attached. This enabled the trainer to control the dove's movements without harm to the bird. In yet another scene, Albert and Harriet are invited to a birthday party at her loan officers' house. At the party there is a magician, Dr. Surprise, who performs a magic trick with a dog. The dog is seen sitting on a stool inside what is believed to be a magic cabinet. After closing the curtain and turning the cabinet, the dog disappears. In one scene, Harriet is at a business meeting and the woman down the hall is staying with Albert. While looking at the paper, Albert sees an advertisement for Mr. Antoine's magic show that night in Atlantic City. Albert quietly packs his belongings and travels by bus to Atlantic City. After arriving at the show, he sneaks in through the backstage door and enters Mr. Antoine's dressing room. When he walks in, a cockatoo is seen sitting on his perch and starts chirping as he sways back and forth. He does this several times throughout the scene. The trainer merely placed the bird on his perch and cued him with hand signals with food as a reward. Other animal action consists of one scene with squirrels, another with a cat, and two scenes with a mouse. The squirrels are seen in the background at a park while Bogus and Albert play soldiers. There is also a scene where we see Antoine perform a magic trick where he cups his hands in front of Albert and then opens them to reveal a tiny white mouse. Albert is also seen carrying a mouse while in its cage. In yet another scene, while Harriet is having a meeting with her banker at a warehouse, Albert sees a cat and picks him up.