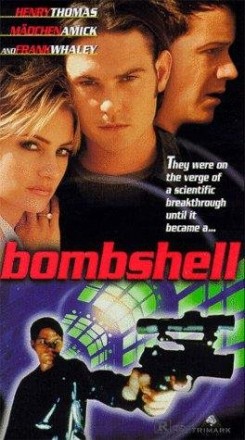 Bombshell is a futuristic film about two scientists, Buck and Malcolm, who develop a cancer. Buck is kidnapped by a terrorist and a surgical implant is placed inside his body which, if not treated, could cause his demise. The terrorist releases him, however, Buck must follow all of the terrorist's demands in order to obtain the antidote.

There is a scene in which a cat is shown in a laboratory in an isolation tank. The cat wears a head shield with a number of cables and wires attached to its body. After a warning goes off, the cat is shown thrashing about inside the isolation tank. Immediately afterwards, the cat is lying in the tank, dead. A real and a fake cat were used. The real cat was used for the establishing shot. A real cat harness was used with little "electrodes" attached to the harness, not the cat. The tube was strapped to the cat under his chin by a plastic coated 1 inch wide wire strip. A fake syringe was used.

Other animal action consists of a man holding a cat in several scenes.