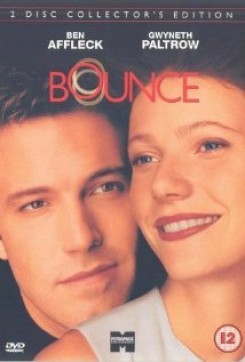 Bounce is a romantic comedy that opens with Buddy, played by Ben Affleck, meeting his friend Greg at an airport bar. Greg's flight, however, is canceled due to a snow storm, prompting Buddy to selflessly give his ticket to Greg so that he can get home to his family. Buddy spends the night in town and the following day discovers that Greg's plane has crashed, leaving no survivors. Feeling responsible for Greg's demise, Buddy decides to locate Greg's family and offer his heartfelt condolences.

The first time we meet Abbey, played by Gwyneth Paltrow, she is walking her dog - who also happens to be named Buddy - on a leash to the back of a parked station wagon.

Buddy jumps up onto the back of the car with his front paws while Abbey hoists Buddy's back-end up into the vehicle. For this action, the trainer taught the actress how to gently lift Buddy into the wagon and then merely handed the dog's leash to her before filming.

You Can Never Have Too Many Buddies

The part of Buddy the dog is played by a one year-old Rottweiler named Barkley. Three other dogs were on-hand just in case our star needed a stand-in. The dogs stayed in their own air-conditioned trailer while they waited for their turns in front of the camera. Although it was Barkley's first time acting in a movie, his natural talent left the other dogs with little work to do.

Eventually, the human Buddy meets the canine Buddy. This pivotal moment is marked by Buddy the dog excitedly galloping out of Abbey's bathroom towards Buddy the man, jumping on him, and successfully knocking him down. Abbey quickly grabs the dog by the collar and takes him off-screen. For this scene, the trainer was in the bathroom with canine-Buddy cueing the dog to bark and growl. When the door is opened, the trainer verbally cued the dog to run to the actor and jump on him. The actor then fell to ground while Abbey gently clasped the dog's collar to bring him to the trainer, who was waiting off-camera with a treat.

Later, as the human Buddy and Abbey enjoy a drink at an outdoor café, Buddy the dog lies on the ground nearby. When the couple gets up to leave, Abbey takes the dog's leash and Buddy automatically rises and walks with them. Before they leave, however, Abbey empties Buddy's water bowl, which was on-hand to quench the dog's thirst during the scene. For the canine action, the trainer put Barkley on his mark and told him to lie down and stay. The dog seemed happy to oblige.

Buddy livens up another scene by playfully running to a young actor who is sitting on the floor watching television. Ben Affleck's character follows the dog into the room and affectionately hugs his Buddy counterpart. For the scene, the canine Buddy was released by the trainer and verbally cued to run into the room, where he just naturally stayed to receive attention from the other actors.

On a final note, the aquarium in the children's room was placed on the shelf by the trainer just prior to the filming of the scene