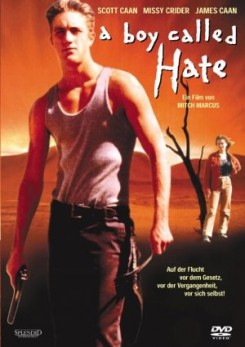 A Boy Called Hate is the depressing story of Buba, a young man who has no idea what direction his life will take, nor does he care.

Coming from a broken home, Buba resides with his father who suffers from alcoholism since Buba's mother has left them. Buba has been in trouble with the law and has just gotten out of Wilson Juvenile Detention Center for stealing a car. When he arrives home, he gets into an argument with his drunken dad. Full of anger and frustration, Buba carves the word "Hate" into his arm with a razor, gets a gun he has hidden in his room, leaves the house, jumps on his motorcycle and is off into the night with no particular place or thing in mind. He comes across a girl, Cindy, who is being attacked by a man who intends to rape her. Buba intervenes and saves the girl, but in so doing he shoots the man. Terrified, Buba and Cindy jump on the bike and flee the scene. As they ride through the night, Cindy informs Buba that it was her uncle, a prominent government official, that he has shot.

Later, when the couple stop for a bite to eat, they learn from a local newscast that Cindy's uncle did not die from the gunshot wound and has identified them as his would-be killers. Hearing this, the two realize they must start on a painful journey of trying to elude the police at every turn, either killing or being killed.

Animal action is limited to one scene in which a dog inside the cab of a truck growls at Buba. The dog was placed inside the truck cab by his trainer and followed verbal commands to "growl and smile", receiving food as a reward."