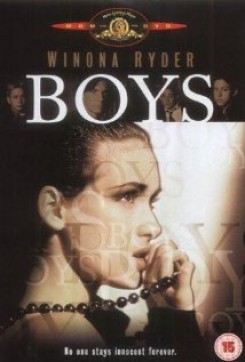 Boys is a coming of age drama about a disgruntled high school student, John Baker, who rescues a woman from a horsefall and ultimately falls in love with her. The young woman, Patty Ware, has a checkered reputation as a wild and irresponsible party girl, who becomes a chief suspect in the disappearance of a professional baseball player. The film opens with the police arriving at Patty's home early one morning to question her about her whereabouts the previous night. It seems that an upcoming young baseball pitcher, Bud Valentine, who was last seen with Patty at a local party, is now missing and a stolen car is also part of the mystery. Patty gives the police no information and proceeds to go for a ride on her horse. She inadvertently is thrown from the horse as it falls following a jump over a gate. While lying unconscious, she is discovered by some young boys from a local boarding school. The two eigth-graders go back to the school to enlist the help of an older boy, John Baker. John "borrows" the school station wagon and brings Patty back to his dorm room. Through a series of flashbacks, we find out that Patty was with Bud and that they both had had so much to drink that they stole a car and accidently drove it off a bridge. Patty was able to escape the car, but Bud was knocked out and drowned in the accident. In fear and confusion, Patty avoids the police and accepts the refuge given by Baker. He is savvy enough to know that something is amiss with this beautiful girl who refuses to get medical attention and he becomes totally infatuated with her and her mysterious predicament. As they spend time together, he falls in love with her and she begins to care for him. Together they confront themselves, their families, the police and ultimately find strength in each other.

For the scene in which Patty is thrown from her horse, three horses were used and the scene was shot in cuts. When we first see Patty riding hard across the field, a horse was ridden by an experienced horsewoman who doubled for the actress. This horse was sponged down with warm water to make it appear hot and sweaty, then lanolin and shaving cream applied to heighten the effect. As per the American Humane guidelines, the path the horse traveled was checked prior to shooting and cleared of any debris and low-hanging branches. For the next part of the sequence, a trained jumping horse is seen going over the metal tube gate and its back hooves tap the top rung. This horse was also ridden by the stuntwoman who paced the horse so that it would appear as if the hooves skimmed the top of the gate. The gate was equipped with a special latch that, when activated by remote control, enabled the gate to fall. As the horse lands on the other side, it seems to regain its' footing for a moment, but then falls over, throwing the rider. For this last part of the sequence, a trained falling horse was used. The ground area for the fall was prepared according to American Humane guidelines prior to filming. A soft sand pit was created and covered with grass making sure that all rocks and clods of soil were removed. Since the scene was shot in cuts, the trained falling horse did a bit of side stepping prior to the fall in order to tie in the jump film footage and the falling footage. This made it appear as if the horse was triying to regain footing prior to falling and throwing the rider. Non-toxic make-up was used on all the horses to make them appear as one. Later in the film, Patty convinces Baker to get her out of the dorm and look for her horse, which had evidently run off after the fall. They don't find the horse , but end up at the county fair. As they are making love in the wooded area near the fairgrounds, a dog walks by sniffing around them. The dog belongs to one of Patty's old friends who later comes over calling for the dog. The dog was merely responding to his trainer's voice and hand commands, moving from point A to point B behind the actors. The only other animals in the film are some horses that are seen in the background. The scene is staged at a horse farm in the area and we see the horses being led around a fenced area and into the stable.