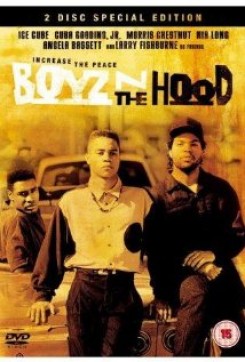 Set in the black community of South-Central Los Angeles Boyz N The Hood explores dramatically the variety of problems faced by young urban blacks. Tre Styles is a bright youngster living with his mother who does her best to raise him decently. When he gets into trouble at school she takes him to live with his father where he will get a man's discipline and a strong sense of values. Tre makes friends in the tough neighborhood where his father lives and the boys grow up exposed to the realities of ghetto life. Any feelings of hope for a future are quickly replaced with despair when crime and gang violence are a constant threat.

Animal action is minimal. Stray dogs sniffing at overturned garbage and flies swarming around blood in an alley add to the ghetto atmosphere. The blood, of course, was sweetened stage blood and dog food was placed around the trash cans. As the boys run through a back yard, two Doberman's lunge at the wall separating them. To get the dogs to lunge at the wall the trainer first played a tug of war with the dogs using a rag. When the director called "Action", the dogs were released and ran to the wall where their trainer held the rag and a bag of hot dogs.