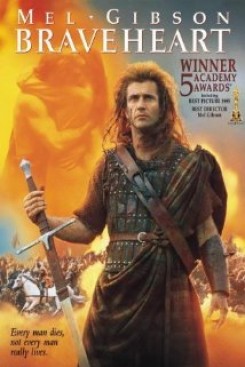 Braveheart is the story of William Wallace, a famous Scots freedom fighter late in the thirteenth century. England was under the rule of the unscrupulous King Edward, I, nicknamed Longshanks, who craved more and more power as the battles to take control of Scotland continued. After losing his father, brother and wife to the slaughtering English, William rallies the ragtag Scots and fights the British for the freedom of Scotland. His courage and valor become legendary and even after his death and martyrdom, the words "Wallace" and "Freedom" become the battle cries that spur the Scots to victory. The movie opens while William is a boy. He watches as his father and brother are brought back to the farm in a wagon, both of them killed during the bloody battle to take over Scotland. Years later, William is grown up and well respected by his friends and countrymen. Although they have been after him for awhile to join Scotland's still brewing battle to save their beloved country, William still opposes the war and refuses to go. In the meantime, William has met Murron, a woman from his past, who gave him a rose as he was leaving to live with his Uncle Argyle after the tragic death of his father and brother. As an adult, he returns to the village and gives her back the same rose. William and Murron fall in love, and secretly marry. At the time, one of Longshank's noblemen had decreed that he has the right to deflower any woman on her wedding night. Seeing the way William and Murron look at each other in adoration, the despicable nobleman sends for Murron while William is away. Murron runs but one of the king's soldiers captures and beats her in an attempt to rape her. However, William catches him and attacks the soldier. William sends Murron away while he fights the other soldiers. The contemptible nobleman finds her and, along with the other soldiers, ties her to a tree. As William rides up, the soldier slits Murron's throat and she dies. William declares his own personal war against England. He heads up Scotland's ragtag army and plots his revenge for the death of his beloved Murron. At one point, William walks into enemy quarters with his hands behind his neck to show that he is unarmed and wishes to talk. The man who killed his wife sits on horseback nearby. William has hidden a knife behind his back, so when the soldier rides up, William grabs the man with such force that not only does the soldier fall to the ground, but also his horse. William slits the soldier's throat in the same manner as the soldier did Murron's. However, this is by no means the end of William's wrath. He and the ragtag Scots continue to fight for their freedom. Years later at the Battle of Stirling, the outnumbered Scots defeat Northern England, then they successfully siege York and Falkirk. In the end, William is captured, tortured and then, executed. However, William Wallace's name will live on forever as the legendary force who freed Scotland.

Horses were used throughout, both as a means of transportation and in the battle scenes. The battle scenes were all shot with pockets of people fighting in different areas, with the horses having their own area. The ground had been dug up and filled with sand for the horse falls. By using a long lens, it pulled the groups of people and animals together for the scenes. Then by adding some cutting and splicing of the film in post production, the scenes appeared very violent with horses in the middle of all the fighting. In one scene there were several horses lined up and then charged into a group of warriors. Three of the horses fell head first into the fighters. These were fake horses on tracks. When they got to the end of the tracks they merely somersaulted throwing their stuntriders forward. This was also how a very dramatic scene was accomplished when William is hit by an arrow. He stops fighting, jumps on his horse and rides across the field to attack the King. On his way, the King's protector attacks William and his horse somersaults forward throwing William over his head. The ride across the field was done on a real horse, but the horse that took the fall was, here again, a fake horse on tracks. In another scene a horse appears to be stabbed. This was accomplished with a fake retractable knife. Several scenes show horses that appear to be either in or near fire. This was accomplished both by filming through the fire, which made the fire appear closer to the animals than it was, and with special lenses. Fire was both in front of and behind the horses, but never near them. The horses were used to being around fire, but for extra precautions, total fireproof body suits were made for each horse. In one scene, William rides his horse into a tower to kill the Earl of Bruce. Then he rides it out of the tower window into the water 30 feet below. The horse ridden into the tower was real, but the horse who rode out of the window falling into the water below was another fake horse on tracks. Other animal action includes a flock of sheep crossing a road, oxen pulling a cart, a flock of birds, farm animals in the background and a deer grazing in the forest. Braveheart was filmed entirely on location in Scotland, England and Ireland. American Humane was not on the set, but after reviewing outtakes of Questionable animal action frame by frame, while at the same time, on another screen, viewing frame by frame the actual scenes in the picture.