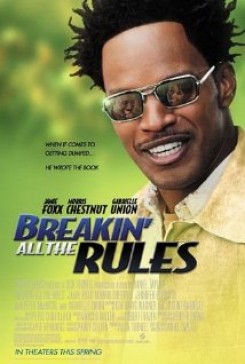 Breakin' All The Rules

After being unceremoniously dumped by his fiancée Helen at their engagement party, Quincy Watson (Foxx) converts his pain into art by penning a "how to" manual on breaking up that becomes a nationwide bestseller. What follows is a comedy of errors involving some peculiar love triangles, and by the last frame, each character learns how to nurture the very relationship they so desperately wished to sever.

The production alternated two pugs, Ling and Chin-Chin, for the part of Quincy's dog Rufus. To get them to walk with the actors or lay around the house and yard, trainers would place the dog on its mark and then stand off camera using a combination of hand signals and verbal cues to achieve the action. Production closed the road in front of the house to traffic when filming, and the dogs received treats after each performance.

One running gag in the film is Rufus' doggy door. He's seen going into the door, but never emerging outside — the dog is always positioned half inside and half out. In one scene, Rufus pees on the floor while going through the doggy door. A trainer worked with both dogs to get them used to the doggy door, then used verbal cues and hand signals to get the dog to go partway through the door and stop. The trainer then held one end of a plastic tube attached to the dog which controlled the flow of water that made it look like Rufus was urinating.

When Evan (Chestnut) comes to Quincy's house to check up on his cousin, he knocks on the door and Rufus pokes his head through the doggy door and growls at him. On the trainer's cue, the dog looked out, growled, and then walked off camera to the trainer.

In one scene, Rufus is half in and half out of his doggy door when Quincy comes home and opens the front door. The dog continues outside as Quincy enters the house. A trainer put the dog on its mark inside and then stood off camera using hand signals to get the dog to stay and then eventually walk through the door and over to the trainer. Another trainer stood inside to help guide the door slowly open along with the actor on the other side. Both dogs were well prepped for this scene, as was the actor.

Another running gag has Rufus drinking liquor with his human pals. He has his first taste when Evan is having a drink and pours some of it into Rufus' dog bowl. Then the two are seen passed out on the sofa. Later, Helen makes a drink for herself and Rufus runs over, barking excitedly as he jumps into her lap to get at the drink. A trainer used a combination of verbal cues and hand signals to get the dog to achieve the action. Colored water with a splash of apple juice stood in for the alcohol that so enticed the dogs.

Toward the end of the film, Quincy visits the shelter and adopts four additional pug dogs. The animals in the background were real shelter animals and trainers supplied the pugs that Quincy rescues. The actor received instructions on the proper handling of the dogs and loved every minute of the scene. The pups were able to act naturally in their shelter pen, which trainers had cleaned and sanitized before filming began. Back at Quincy's house, Helen is sitting in the living room when the four pugs come bounding in and Quincy enters carrying Rufus. Two trainers released the pugs onto the set, which was closed to all unnecessary personnel. Trainers and crew members surrounded the set in case any of the pups decided to wander off, and the actors carried pockets full of treats to entice the dogs to stick near them.