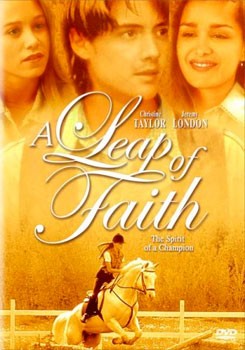 A present day drama, Breaking Free tells of Rick a teenager, who, along with two of his buddies, attempt to rob a convenience store. The owner, a woman, shoots one of them as they take off. The three boys are arrested, one of them stays in jail, Rick is sent to a youth camp, while the third one recuperates in the hospital. Rick, the one sent to a youth camp, is doing well so, when Annie Sobel, the owner of a local horse ranch needs a stable worker, he is given the opportunity to work off his jail sentence there. Rick has always loved horses, and eagerly accepts the offer. While working there, Rick meets a lot of different people and soon learns that the ranch is a camp for blind children. He enjoys meeting and helping the children learn to ride the horses. Recently blind from an accident, Lindsay, a very bitter teenage girl, arrives at the camp with her parents who are struggling with themselves, wondering if they are doing the right thing. Lindsay at first refuses to become involved with anybody or anything. The camp counselors refuse to allow her to wallow in her self pity and insist that Lindsay at least show up for the planned activities. However, she refuses to participate. In the meantime, Rick rides along with the camp foreman, Lester, to deliver some tack that the camp has donated to Mr. and Mrs. Morris's ranch. As they drive up, they see a beautiful white horse named Ghost. A woman, presumably Mrs. Morris rides Ghost as they go through the paces and jump steeples. As Ghost is about to jump the first steeple, Mrs. Morris spurs him so hard that the spurs cut into the horse, causing it to bleed. The woman still wants to jump him and in so doing, falls. Later, Mr. Morris wants to put the horse down for causing his wife's injury. Of course, his wife has lied about the circumstances. When, Rick drives up to the Morris' ranch to deliver something else. He hears what sounds like a struggle with a horse neighing. As Rick approaches the stables, he sees Mr. Morris beating Ghost senseless. It is also obvious that he has let Ghost get filthy dirty and has been starving him. Rick wants to take Ghost from the Morris's as does Lester. The only problem is that it would be stealing. Without Lester's or anyone else's knowledge, Rick goes to the stable where Ghost is and takes the horse out of the stable and back to the camp. When Ghost sees Rick, the horse actually appears to smile in relief. Upon arriving back at the camp, Rick nurtures Ghost and takes extra care of the horse. He pours alcohol on Ghost's now infected wounds. After a lot of tender loving care from Rick, Ghost becomes fit enough to be ridden again. In the meantime, Rick tells Annie and Lester that Cal Morris donated the horse to the camp. The first one to ride Ghost is a little blind boy by the name of Billy. Up to this point, no one knows what kind of accident Lindsay had that blinded her. One day while Rick is grooming Ghost, Lindsay walks in. Rick proceeds to tell Lindsay the story of Ghost's injuries. Lindsay asks Rick to help her up on the horse and walk her out to the corral. Rick walks Ghost and her around the corral until Lindsay and Ghost are comfortable together. The next day Lindsay comes out to ride Ghost again. Rick leads them to the steeple jumps without realizing what is about to happen. All at once, Lindsay and Ghost run toward the steeple. Ghost hesitates and so does Lindsay, but for only a moment. Then they jump gracefully and with ease. It becomes crystal clear that Lindsay's injuries were the result of a steeple jump. Lindsay and Ghost make many jumps. Eventually, this twosome are ready for competition. It takes a long time for anyone to accept or allow a blind girl into the competition, but the decision is made. Not only are they in the competition, but they also win!

Animal action is extensive throughout the film. Most of the scenes using horses are simple A to B action, or background only. However, the scene where Mrs. Morris spurs Ghost and he bleeds, was filmed in cuts. We see Mrs. Morris spur her horse, then we see a close-up shot of the gash in the horse's side. To accomplish this scene, a wrangler was used as a stunt double and was wearing rubber spurs. For the close-up of the horse's injury, make up was applied to make it look like a gash. Then non-toxic stage blood was applied. The scene where Cal Morris beats his horse, Ghost, was also filmed in cuts. First we see Mr. Morris raise the whip as if beating Ghost. Then, we cut back to Rick reacting in horror. We only hear sound effects of the whip and the horse neighing. These were dubbed in during post production. To make the horse appear like he is starving, non-toxic stage make-up was applied to each side of the horse. After Ghost feels better, Rick lets him run around in the corral. Ghost is so excited to see Rick that he rears up as if to say "Hello". The horse who played Ghost was a trained rearing horse who does, indeed, enjoy rearing. The same is true when Lindsay jumps him in the steeple chase. He likes to jump. In another scene, Rick has promised Billy that he would take him for a ride on Ghost. Rick forgets all about it and asks Lindsay for a date for the same evening. Billy is angry, so he tries to put the saddle on Ghost. Billy then jumps up on the horse and takes off. Ghost gently walks with Billy as they go out of the stables. An owl sits up above and watches them. As they get further and further away from the ranch, a lone wolf follows in the distance. At one point the wolf lunges for Ghost, biting him in the leg. Ghost rears up with Billy still in the saddle. This scene was also shot in cuts. We see the wolf alone in the shot. We then cut back to Billy and Ghost. Then we cut to a close up of the horse's leg and the wolf biting it. This was a fake leg. Ghost takes care of Billy, as they walk towards home in the stream. Billy manages to get off Ghost and wrap his handkerchief around Ghost's leg. As they ride further in the stream, Ghost stops, refusing to continue into the rapids. Billy falls off the ledge and Ghost tries to get him, but can't see him on the rocks. Just then Rick rides up and spots Billy. Rick pulls Billy up but is furious at himself for not being there for Billy. Rick walks Ghost out of the stream and gives him to Lindsay who walks Ghost home. The next day, Cal Morris drives up to the ranch and spots Lindsay riding Ghost. Cal tells Annie that he never donated Ghost to the ranch, and in fact, Ghost was stolen. Annie allows Cal to take his horse, and starts processing the papers to send Rick back to the youth authority. Back on his ranch, Cal takes Ghost out to a field to shoot him. We see a close-up of Ghost as Cal cocks the gun but before he can shoot, Rick runs up, jumps on Ghost's back and takes off with him. For this shot, the trainer cued the horse to stay and a stunt double simply jumped on the horse's back and rode off. In the end, Cal gives up and agrees to donate Ghost to the ranch. Mae, the matron of the youth authority camp, is not angry with Rick, as she knows how truly sorry he is for everything. Lindsay begs Mae to let Rick stay. She wants to show everyone how well Rick has taught her to jump with Ghost. Unfortunately, Mae cannot change her mind, but little Billy, who hasn't said word one to anyone, suddenly speaks and tells Mae how much Rick has taught him and how Rick saved him. With that, Mae allows Rick to stay, at least until the competition that Lindsay is entered in is completed.