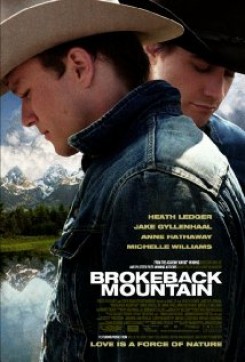 The story of a forbidden and secretive relationship between two cowboys and their lives over the years.

American Humane's Film & Television Unit did not monitor Brokeback Mountain, which was filmed in Canada. The Film & TV Unit's work is funded by a grant from the Industry Advancement and Cooperative Fund – administered by trustees from the Screen Actors Guild (SAG) and the Alliance of Motion Picture and Television Producers (AMPTP) – which allocates resources solely to cover SAG domestic projects working under the SAG/Producers codified agreement.

Productions filming abroad do have the option of contracting for American Humane's monitoring services. However, this does not guarantee that the film will receive American Humane's No Animals Were Harmed® End Credit Disclaimer, since the Disclaimer is awarded exclusively on the basis of the animal treatment during production. Citing the fact that this was a small, low-budget production, the filmmakers declined our monitoring services, though they did register with American Humane and submit the appropriate documentation, scripts, and call sheets. Since American Humane was not present to witness the extensive animal action firsthand, and the production company did not provide a pre-release screening, we rated the film "Not Monitored".

Brokeback Mountain has generated a flood of calls and e-mails to American Humane from moviegoers concerned about the treatment of the animals in the film. Many viewers would like to know about the handling of the sheep and how the scene in which an elk appears to be shot was achieved. Since American Humane was not on the set to monitor the action, we will not speculate about how that action was achieved. However, if American Humane had monitored the film, our Guidelines for the Safe Use of Animals in Entertainment would have been applied to ensure the safety and humane treatment of animals. For example, our Guidelines state that American Humane will not allow any animal to be treated inhumanely to elicit a performance, and general anesthesia and sedation are prohibited for the sole purpose of filmmaking.

3) Letting your voice be heard. At the movies, stay through the end credits to be sure the film received the "No Animals Were Harmed" Disclaimer. If you do not see it, e-mail your concerns to American Humane at info@americanhumane.org.