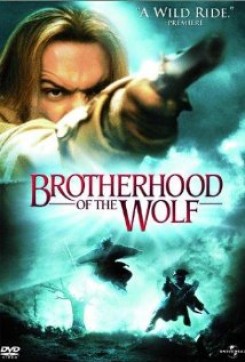 Brotherhood of The Wolf

Set in 18th century France, the Chevalier de Fronsac (Samuel Le Bihan) leads an investigation commissioned by the King to discover the whereabouts of a mysterious beast that has already viciously killed hundreds of people.

Although released in America by Universal Pictures, The Brotherhood of the Wolf is a foreign film and Production did not contact AHA during filming. The film depicts extreme violence to animals and after several unanswered inquiries to the production on how the animal action was achieved, AHA cannot confirm nor deny whether intentional cruelty occurred in the making of the film. The following review is based solely on AHA's screening.

A group of men on horseback and on foot are out hunting for the wolf beast that is terrorizing their town. Packs of wolves run away from the men in the countryside as they shoot at the wolves. Several wolves are shot, and one that is hit is flung into the air from the force of the bullet. It squeals and comes back down to the ground in slow motion.

A dead wolf lies on a crude examining table while a man slices it open with an operating tool. The man pries open the wolf's mouth and touches its tongue. He proceeds to stuff the wolf with a straw-like substance.

Several scenes throughout the film depict a lone white wolf staring out from a cave or on a hill. In one scene, a woman tries to shoot at the wolf, but a man diverts her gun. Packs of wolves running in the countryside appear in several scenes.

A huge black stuffed wolf is presented to a crowd of townspeople.

A dog barks and runs on the countryside, drawing attention to the lamb that is stuck in a steep ravine. The dog's owner climbs down to rescue the lamb, which is baa-ing, and takes it in her arms to carry back up the hill. When the wolf beast comes to get her, she drops the lamb, while the worried dog continues to bark. It eventually runs away.

Many dogs are kept in jail-like cells, barking uncontrollably. They are food for the beast. Several dogs are seen chained in an arena-like structure, barking and straining against the chains excitedly. Suddenly the beast enters and it's implied that the dogs are to fight the beast.

In one brief scene, sheep are herded in the snow by two people.

Various horses and riders appear throughout the film. Some ride quickly and there is a quick jump over a fallen tree, and some ride in hard rain and seemingly rough terrain. However, in one intense scene, while several horses are tied to posts outside, someone shoots fiery arrows very close to the horses — some arrows hit the hay that they are chewing and set fire to it. The horses whinny and buck in fear, straining against their ropes.

A few bunnies scamper in a cave.

A whole dead animal roasts on a spit.

An explorer finds a dead fish covered in fur.

AHA is deeply concerned about the welfare of the animals used in this film and needs your help in voicing these concerns to the makers and distributors of Brotherhood of the Wolf.