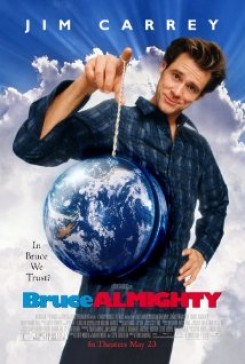 Bruce Nolan (Jim Carrey), a New York television reporter is discontented with almost everything in life despite his popularity and the love of his girlfriend, Grace (Jennifer Aniston). At the end of a really bad day, Bruce angrily ridicules God and he responds. God appears in the human form of Morgan Freeman, endowing Bruce with his divine powers. He challenges Bruce to take on his job to see if he can do it any better.

Bruce and Grace have a pet dog, Sam. A mixed breed, 10-month-old dog named Buster, played the part of Sam. Another mixed breed dog named Bonnie was on call just in case Buster needed a break. Both dogs came from a shelter in North Hollywood, California. The director, Tom Shadyac fell in love with the dogs. After the scenes were over he would get down on the ground and play with the dog and give it hugs and kisses. It became known as the "love reward" and he would ask the trainers permission and then present them with some well-deserved hugs and kisses. After the scenes with Jim Carrey were over, the actor would also get down on the floor and play with the dog. The last day of filming the dog action brought sadness to most of the cast and crew as they all gathered to say goodbye to their canine co-stars.

The running gag in the film is that Bruce is having trouble getting Sam to go to the bathroom outside. Sam has no problem lifting his leg on the couch or chair, but just stands and looks at Bruce when he is brought outside. There are several scenes where the dog is shown lifting his leg and beginning to urinate on the couch or chair. Bruce picks the dog up and carries it outside as the dog continues to pee. Bruce sets the dog down outside on a small area, which is mostly dirt and a tree.

A trainer placed the dog on its mark next to the chair or couch and a tube was engineered under the cushions to pump water making it appear as if the dog was peeing. Another trainer stood off camera and used verbal cues to get the dog to lift its leg. A crew member stood off camera and controlled the water flow. The actor approached the dog from behind and picked it up. The cameraman turned off the camera and Jim Carrey began to play with the dog and give it treats. The actor then had a copper tube placed up his pant leg. The tube came out of the top of his pants and was bent up to fit between the dogs dangling legs. The actor held the dog close to his chest, belly side up. Some colored water was pumped through the tube to give the appearance that Sam was still urinating as they go down stairs and outside by the tree.

In another scene, Grace finds Sam standing next to a puddle on the floor. She grabs his collar and leads him to the door and puts him outside. Believe it or not, this was one of the hardest scenes to film. Sam wanted to play so every time the actress grabbed his collar, the dog would begin to wiggle and snuggle up to the actress. She would break character and begin to encourage the dog, which usually brought the director onto the set for some hugs and kisses. Finally this simple scene was filmed.

Sam however, actually used the bathroom in a few scenes. He is seen standing next to the toilet urinating, using his nose to put the seat down and his paw to flush before exiting with some toilet paper stuck to a paw. Later when Grace walks into the bathroom, she finds Sam sitting on the toilet, holding a newspaper in his paws. The toilet that was used is a real toilet, but inopperative and lower to the ground than most. A platform was built inside the bowl for the dog to rest his front paws on when standing at it. A trainer stood off camera cuing the dog to look in various directions and used verbal cues to get the dog to nudge the seat with its nose and flush the toilet with its paw. The seat was rigged with a spring controlling it down easily.

So how does a dog read a newsparer? A special metal holder attached to the toilet to hold the newspaper and was padded for Sam's comfort. The paper holder not only held the newspaper but had special supports for Sam's front paws. The dog was taught to sit on the toilet and to rest his front paws on the paper holder with tape holding the newprint in place. A piece of doubled sided tape was used to attach the piece of toilet paper to Sam's paw. Sam nudged the bathroom door open with the help of a crew member who was standing out of camera sight.

At the end of the film, Bruce brings Sam to a small piece of grass near a tree. He lifts his leg to show Sam what to do but Sam just digs in some nearby dirt. Bruce's solution is to bring the couch outside to Sam. Later we see a close up of Sam peeing on the cushion and the camera pans back to show Bruce holding a cushion from the couch up against the tree. A treat was hidden in the dirt before filming began to encourage the dog to dig on cue from his trainer. When the dog pees on the couch, the tube was again hidden in a cushion, however a computer enhanced the urination when Sam pees on the cushion against the tree.

As Bruce and Grace wrestle on the floor, Sam jumps up from his bed and looks at them. A trainer placed the dog on the bed and stood off camera using a combination of verbal cues and hand signals. This was filmed separately from the actors wrestling on the floor and inserted into the scene in post production. Since both actors played with the dog between takes, the dog was very comfortable around them.

When Bruce goes into the street to retrieve his beeper, he holds up his hand and tells Sam to stay on the sidewalk as he walks into the street with cars approaching. Two trainers were standing off camera using hand signals and the few cars that passed by in the street were aware of both the dog and the actor.

In one scene where Bruce is thinking of different ways to organize all the prayers he has been receiving, he tries putting them on little yellow post-it pads. We then see the entire room as well as Bruce and Sam covered in small yellow post it note pads. Suits made of lightweight material were custom made for both the dog and the actor. Post-it notes were stuck all over the outfits and the crew did a good job covering the room. The camera angles helped also. The suit was put on the dog right before the camera rolled and taken off right afterwards.

In another scene, Sam changes the channel on the television by hitting the remote control, which is sitting on the coffee table. The remote control was secured to the table and Sam was cued off screen to walk to the remote and "foot it."

A reporter is doing a piece on Hank, the police dog at a K-9 Training Center, played by a German Shepherd named Kane. This dog is trained in Schutzhund, a German method of training. Aspects of the training include overcoming obstacles, agility trials and attacking a person wearing a padded sleeve. A stuntman wore the protective sleeve and a trainer doubled as the police officer that releases the dog. The dog runs after the stunt man, attacks his arm and gets a reward - the protective sleeve as a play toy.

Later Hank is shown digging in some dirt, at a crime scene and pulling on a foot sticking out nearby. Bruce pets the dog and gives it a bone. A treat was buried in the dirt to encourage the dog to dig. The fake foot was made by the special effects department and was used as a toy right before filming began to help encourage the dog to pull on it.

Later, if you stay until all of the credits have been shown, you will see Jim Carrey wearing the protective covering and playing with Hank. This was filmed during a break with the trainer standing just off camera.

When Monkeys Fly Out Of His Butt

Bruce confronts some thugs in an alley one night, and one of them makes the comment, "...When monkeys fly out of my butt." Since Bruce has special powers at this point, he can make a monkey do just that. The thug's pants begin to move, then tear, and a cappuchin monkey head pops out of the torn seam. The monkey then sits on an old couch in the alley as Bruce begins to rumble with the thugs and the monkey covers its mouth with its hands. As the last thug runs down the alley and begins to climb a fence, the camera zooms in for a close up of his rear end then to the monkey running and leaping up towards him. Guess the monkey was just returning the way it came in.

Two Capuchin Monkeys were used for this part. Levi was the monkey used to get the close up reaction shots and Spencer was used for the moving shots. The special effects department built a fake body frame that was supported by bars and dressed it like the actor. A special padded platform was built inside the pants near the torn seam for the monkey to sit on. The seam in the back of the pants was torn and Velcro sewn on to hold it together. A trainer placed Levi on the seat just before filming began and another trainer stood on the other side of the pants just off camera. When that trainer called to the monkey, it pulled the seam open and the trainer would hold up different toys to get different reactions.

Levi was also the monkey who reacted to the fight in the alley by covering his mouth. The trainer put the monkey on its mark and stood off camera using hand signals to get the monkey to cover its mouth. Then three trainers stood around the monkey on the couch and tossed a tennis ball back and forth to get Levi to look in various directions. The actor ran down the alley and one trainer released the monkey who ran down the alley towards the actor but stopped when it reached the dumpster where another trainer was hiding with a treat. Spencer was later filmed jumping up and down on specially made padded platforms. This was inserted into the film later to make it appear as if the monkey was leaping back up into the rear end.

All Creatures Great and Small

Bruce goes into a diner and orders some soup. As he looks into his bowl and uses his new powers to part his soup like the Red Sea, if you look closely a cockroach is crawling on the table nearby. A wrangler put the insect on the table and it began to naturally crawl across the table. The wrangler later collected the insect.