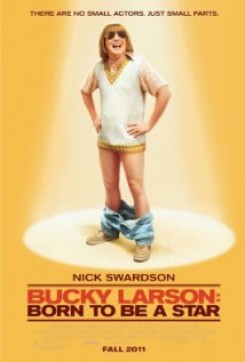 Bucky Larson: Born to Be a Star

In one scene, a man standing in a goat corral places peanut butter on his crotch area, lowers his pants, and allows the goats to lick it off. To achieve this shot, trainers placed several goats in the corner of the pen while the man dropped his pants, which had actually been rigged with a feed pouch/grain bag (not seen on camera) attached to his underwear. Trainers released the goats and cued them using buzzers and food to eat out of the pouch, making it look like they were eating from the man's crotch area.

At a bus stop, a man has a pig sitting next to him on the bench. Then the pig is seen sitting on a bus seat (next to the man), licking a lollipop. Moments later, Bucky (Nick Swardson) is sleeping in the seat next to the pig and is resting his head on the pig's body. Finally, the man walks his pig on leash off the bus and down the city sidewalk. This was filmed in separate shots. All actors who came in contact with the pig were instructed on proper handling. The pig had a harness and leash at all times. Trainers placed the pig on its mark on the bus bench, instructing the actor how to hold the leash and keep the pig close by. The bus was never moving for the interior scenes. The lollipop was covered in plastic, which was then lined with baby food to entice the pig to lick it. Trainers had the pig exit the bus on leash by placing a ramp along the bus stairs and instructing the actor how to guide the leashed pig down the ramp and onto the sidewalk. The bus had been pulled up extremely close to the sidewalk.

A bird sits on a tree branch outside Bucky's window. Bucky tries whistling at it, but the bird just looks at him and cocks its head. For this brief and mild scene, trainers placed a pigeon on its mark on a prop tree branch and tied it to the branch with a leg-band line. The bird was then filmed giving certain looks and then was retrieved right after.

Production provided documentation for the dead bird prop seen floating in the pool when Bucky brushes his teeth.

A dog and owner are by the pool in the background as Bucky reads his apartment complex's bulletin board. A private-party dog stayed with her actual owner during this brief background scene, and the owner gave the dog plenty of rest, shelter and water between takes.

Horses stand in the background as the crew gets ready to shoot the porn film in the desert. Bucky, on horseback, approaches the damsel in distress, and then the camera cuts to Bucky off the horse, and the horse stands in the background while Bucky and the damsel deliver lines. Bucky then mounts the horse and canters off, running across the sandy desert plain. Anytime the character is not seen very close up, a stunt double was used. Whenever the actual actor was used, he was instructed on the action, and the horse was well-prepared. Trainers stayed nearby. Costumed trainers held the horses in the beginning of this scene. The path was rehearsed at a walking pace to get the horse familiar with it, and it was checked for debris and safe footing.

In another scene, Bucky rides the horse from the movie set across the desert and then along the city sidewalk, stopping at a valet outside a restaurant. The streets were closed off to normal traffic, and the cars in the street were movie cars driven by professional precision drivers who kept a safe distance from the animal. For most of this scene, a stunt double played the role of Bucky. For the end of the scene, the stunt double was replaced by the actor, who had been instructed on proper horseback riding techniques. The valet was instructed on proper handling of the reins. Trainers hid just out of frame during this entire scene.

When Bucky and Kathy (Christina Ricci) ride on horseback in a Los Angeles city street among cars during a busy traffic time at night, trainers equipped the horse with special footing and rubber boots for better traction. The actors were well-rehearsed for the action and were experienced at riding. A trainer rode another horse a few cars ahead, just to help keep the slow pace, although the horse set the speed for the car drivers, who were all professional precision drivers who kept a safe distance from the animal. Trainers also stood alongside the horse, just off camera.

The mule seen at the carnival was stock footage, for which production provided documentation.