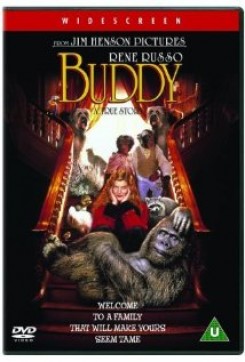 Buddy is a film based on the true story of Gertrude "Trudy" Lintz, a real life socialite who changed the way people looked at animals. Her love of animals earned her the reputation of an eccentric when she adopted a sickly infant gorilla from the local zoo where he undoubtedly would have died. With the cooperation of her doting husband, a doctor who shared his wife's love of animals, the childless couple named the orphan "Buddy" and raised him as if her where their son.

Animal action is throughout the film with the use of chimps, dogs, kittens, horses, fish and a parrot. Buddy is never portrayed by a real gorilla. The baby gorilla was animatronic and the teen and adult gorilla's were humans in gorilla suits. Two months prior to filming, the actors traveled to the trainer's ranch to rehearse and interact with the chimps. This was instrumental in the filming because the lead actress, in particular, appeared to be comfortable and genuinely fond of the animals The chimps learned a variety of activities such as shaking hands, pouring liquid from a bottle into a glass, riding a pony, kissing and simulating talk, using a key to unlock a door, catching objects, etc. The trainers cued the chimps with verbal or hand commands and positive reinforcement. Much of the chimp action was simple enough that the trainers had only to demonstrate the desired behavior and the animals would mimic it. The chimps were accustomed to being around large numbers of people and traffic, allowing them to feel very comfortable in scenes of this type. Joe the chimp, has his own pet, a kitten, which he holds and pets or picks up and carries in several scenes. Although both kitten and chimp were comfortable with each other, a fake kitten was substituted for the real one, most of the time. The homecoming scene was shot in many cuts with most of the animals being filmed at different times. There is a scene in a movie theater, where the chimps create a ruckus as they throw popcorn and jump up and down on their seats. As a safety precaution, the seats were rigged to stay in place to withstand all of the jumping about. The trainers cued the chimps with verbal and hand signals. In another scene, the chimps, Joe and Maggie, are seated at the kitchen table when Trudy walks in with the baby gorilla in her arms. The chimps get excited and start to throw dishes and other assorted dinner utensils around the room. One of the chimps is about to throw a large meat clever across the room when Trudy intervenes. This scene was shot in several cuts. The trainers cued the chimps with verbal and hand signals. The meat clever was made out of plastic as were most of the other objects. In another scene, Joe and Maggie are in their cages when Maggie cleverly knocks the key to their cages off a wall, picks it up, and releases them both. The two chimps embark on a mission of mischief, as Joe puts his kitten in his pocket and puts on his roller skates and follows Maggie outside. While outside, Joe's kitten gets loose and runs across the lawn just as Trudy's dogs are being walked on leashes. Spotting the kitten, the dogs take off after it, attracting the attention of the geese who run after the dogs. Maggie, in the meantime, has gone to the paddock where she mounts a horse after unhitching the gate and horse and chimp join the chase. This scene was shot in several cuts. For the most part, each animal was filmed separately with one or two trainers per animal. The trainers cued the animals with verbal and hand signals with food as a treat. As a safety precaution, a special saddle was made for the chimp. For the scene at the World's Fair, Maggie walks a highwire using a balancing pole and blowing kisses to the audience. This was not a difficult skill for the chimp to learn. The height of the wire was approximately 5 feet and the width was 2 inches, allowing the proper amount of footing for the chimp. Other chimp specialties were walking on stilts, boxing, dancing and doing a striptease. The chimps were prepped prior to filming for all of these tricks and the trainers cued them with verbal and hand commands. Special safety precautions were taken such as putting non-skid rubber on the ends of the stilts. For the boxing match, the gloves were very soft and the chimps had fun with the boxing. Two trainers were in close proximity to the chimps at all times for this scene. Other animal action consists of police horses in the background of several scenes and three large fish aquariums seen in several rooms of Trudy's house. The fish aquariums were cared for by a company that specializes in fish.