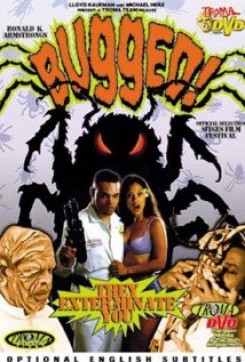 Bugged is a film about Divine Hall, a famous poet and author, who discovers that she has a cricket problem inside her home. She immediately calls the Dead and Buried Extermination Service. However, during a bizarre run of events, some mutagenic chemicals are delivered to the exterminators headquarters instead of their usual bug spray. Unbeknownst to the exterminators, they spray the house with the mutant chemicals, causing the crickets to grow to huge proportions. The next morning Divine awakens to a huge bug sitting on her chest. She calls the exterminators back and they unknowingly spray her house again with the mutant chemicals. When one of the men is eaten by a mutant cricket, the rest of the exterminators are called in to help with the problem. By this time the bugs have grown in numbers and size and surround the house, trapping the exterminators inside. It becomes a battle between man and bug.

There are two scenes in a lab where a white lab rat is seen in a cage. The actor picks up the cage and then places it back onto the table. Then there are a few scenes where some crickets are seen in Divine's house before it is sprayed. In one scene there are a few crickets seen on a plate with some crackers and then on a sandwich. Later, while in her bedroom she sees a cricket next to her computer and she picks up a rolled up newspaper and supposedly kills the cricket. Fake and real crickets were used for these scenes. For the scenes of the crickets on the sandwich and plate, the wrangler merely placed the crickets on their mark for the establishing shot and retrieved them at completion. When Divine hits the cricket with the newspaper, a special camera angle was used to give the illusion that the actor actually hit the cricket. However, when the cricket is seen laying on the desk supposedly dead, it was actually purchased from a pet store where it had already died of natural causes. American Humane was not notified of the animal action during filming. After screening the film, we conferred with the wrangler and director to establish how the animal action was accomplished. However, since we were unable to be present on the set, we are rating Bugged "Not Monitored."