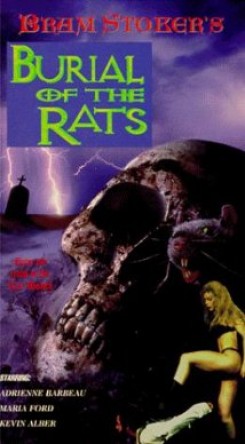 Burial of The Rats

Burial of the Rats is a film based on a story by Bram Stoker about a colony of women who seek to avenge the wrongs men perpetuate on women. The Queen of Vermin is the leader of this group and uses rats to attack and destroy her victims. When the carriage carrying Bram and his father is attacked by hooded horsemen, Bram attempts to save his father. In so doing he shoots and kills one of the attackers. His father is left unconscious and Bram is taken prisoner. He is taken to an old stone fortress and finds that he is the captive of the Rat Women. Their Queen plays the flute and rats scurry around her feet as she plays and dispenses Bram's sentence. These scantily clad women warriors want to kill Bram to avenge the death of their comrade whom he killed. They tie him to a torture device that is rigged over a pit containing rats who scamper around the skeletons of previous captives. One of the women takes pity on him and saves his life, knowing he was only trying to save his father's life, not trying to kill her friend. She brings him writing paper and pens in prison so he can write the story of the Rat Women. He is also enlisted by the women to help them attack those they feel have wronged them. After several exploits, Bram is able to overcome the Rat Women and kill the Queen of Vermin who falls victim to her own rats.

Animal action in this film and utilizes rats and horses. This film was made in Russia and both live and mechanical rats were used. There are several scenes where rats are seen walking over their victims bodies and apparently eating them. The scenes were shot in cuts and the rats were never seen actually biting the actors. They first appear to be crawling on the people and later seen crawling over the skeleton. In one scene the Queen of Vermin is displeased with one rat who does not dance well to her flute. We see her place the rat in a small guillotine and sever the rat's head. This scene was shot in cuts and it was a mechanical rat that actually lost its head. There are several scenes in which horses are used. In the opening sequence the carriage carrying Bram and his father is drawn by two horses. The women are on horseback when the carriage is attacked. Later the women and Bram ride horses into the town when they go off on one of their raids. The horses were supplied by Russian wranglers and the riding is mild.