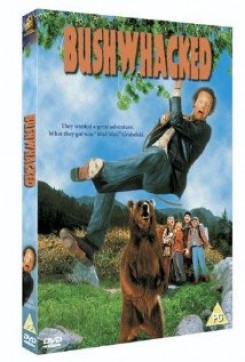 Bushwhacked is a comedy about a bumbling delivery man named Max Grabelski who becomes involved in a murder and poses as a scout leader to escape both the law and the criminals who framed him. At the opening of the film, Max is merely a sleazy package delivery man who expects to pick up some quick cash by agreeing to deliver packages to a wealthy client after regular business hours. Max has no clue as to what the boxes contain, nor does he suspect that he may be involved in criminal activities. During the course of one delivery, Max is mistaken by the FBI as an arsonist and murderer and discovers that the box he was to deliver is full of money and the intended recipient dead. Max sets out on the run becoming the prime suspect in the murder of his wealthy patron. He is desperately trying to find out where a final package for the deceased is to be delivered. He hopes that he can intercept the package, find the real killer, and vindicate himself. With the help of his friend in the dispatching office, he discovers that the scheduled location for the delivery is a place called Devil's Peak, a remote wilderness area. Max steals a car in order to slip out of town and sets off to find Devil's Peak. On the way, he trades the car for a jeep owned by a scout master whom he takes hostage. He leaves the scout master behind, trapped in the first stolen car and heads for the entrance to the state park where he plans to climb Devil's Peak. At the park entrance is a motley troop of scouts who have been waiting for the "rented" scout leader hired by one of the scout's mothers. Since she is not qualified to take Troop 12 into the mountains for their hiking badges, she hires a professional scout master to take her place. However, she hires him sight unseen. When Max drives up to the state park entrance in the stolen jeep, he is mistaken for his ex-hostage who was the real scout master. He accepts the false identity because he is too afraid to reveal his real identity. Max gets roped into leading the scouts on their hike, but has plans to lose them so that he can get to Devil's Peak. In the mean time, the FBI finds the real scout leader and believes that Max has kidnapped the troop of youngsters. Max cannot lose the troop, so he tries to make the best of it and lead the whole group to Devil's Peak. Max bumbles his way through the woods, but eventually bonds with the troop. After one of the scouts rigs a radio and finds out that Troop 12 is considered to be hostages of "Mad Max Grabelsky," they try to drug Max with allergy pills, cough medicine and sleeping pills. Once the FBI catches up to them, they discover that Max is really being set up. We learn that the FBI men are phonies, the man supposedly murdered by Max is still alive and a crime boss, Max is about to be killed, and the crooks want to do away with Troop 12. The clever youngsters band together with Max and eventually foil the crooks' plans, saving the day and becoming first class Eagle Scouts.

Animal action is mild in this film and consists of a bear and bear cub, bees, a dog and various woodland animals. In a scene where Max has just begun to lead the scouts through the woods, they encounter a bear cub. Max sees the cub sitting on a log and goes over to it and begins to pet it and then play wrestle. The little cub finally scampers away and Max sits there smugly facing the scouts. Suddenly, Mama Bear appears from behind a tree and growls menacingly at Max. Max sees Mama Bear and promptly feints. The bear begins to drag Max's limp body away from the scouts and into the woods until she sniffs him and decides better of it. She then takes off into the woods without him. For this scene, the cub responded to visual and voice commands and walked to his mark. He then was rewarded with food. The actor also had food in his hand and was able to pet the cub. The scene where Max wrestles the cub was shot in cuts and both a fake bear and a live bear cub were used. When the real bear cub was used, it was playing with its trainer who was dressed to double for the actor. When the camera shot called for seeing the real actor's face, a stuffed bear was used. For the scene where Mama Bear appears and growls, the bear responded to her trainer's voice and hand commands. When the bear drags Max into the woods, a life size dummy was used to resemble Max and the bear was allowed to play with it naturally. The baby bears were kept away from the adult bears at all times during the filming. In another scene, when Max is having the scouts start to set up camp for the night, he tells them to gather pine cones for the fire. Max unwittingly grabs at what he believes to be a giant pine cone. It turns out to be a bee hive and the bees begin to swarm around Max as he screams. During the long scream, there are several film cuts of woodland animals as they perk up their ears at the sound of the screaming. For this scene, both live and fake bees were used. For a close up shot of Max's hand as the bees begin to swarm, bee handler's released the bees and they were allowed to swarm around the hand of a stuntman who used a protective coating on his hand to prevent being stung. After the shot was filmed, the bees were retrieved by the handlers. The animals who were filmed reacting to Max's scream consist of two deer, a raccoon and a bear cub. These animals were placed on their marks by the trainer and filmed reacting to verbal and hand commands.