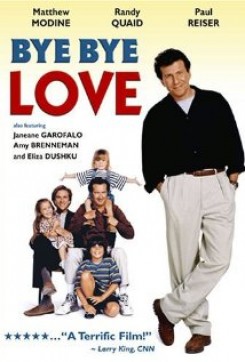 A touching present day comedy with serious overtones, Bye Bye Love tells the story of three divorced men, approximately the same age, who are best friends. The three of them each have custody of their children every other week-end. Our three new bachelors do and share everything together, even meeting at McDonalds at the same time on week-ends to exchange the children with their spouses . They take each other's kids to games, practices and outings together. They even exchange recipes. They're lonely, although they hate to admit it and no matter how they feel personally, our guys are always there for their friends and families.

Animal action is mild. Vic and and his ex-wife, Grace, have a dog, "Ditka", whom they continually fight over for custody. In one scene, Vic's little girl kisses Ditka good-bye. Ditka watches his family as they leave the house without him. To achieve this, the trainer merely positioned the dog, and rewarded him with food. In another scene, Ditka runs around wagging his tail, jumping and playing with the children and their father. To accomplish this, the trainer gave verbal and visual commands to the dog. To get the dog to jump up on the father, food was put in his pocket. The dog was merely responding to the food. One of the children spent the weekend with her father and she took her gold fish. She is seen both walking with the fish bowl and jumping up and down as she carries the bowl. Both a live fish and a fake fish were used for these scenes. A live goldfish was used in the scene where she was just walking with the bowl and a fake one was used when she was running around. After the goldfish scenes were wrapped, the live goldfish was given to the little actress. On another occasion, the guys take the kids to the park and they go on the pony rides. This scene was filmed in Griffith Park in an actual pony ride area. Other animal action included ducks that are seen in the background.