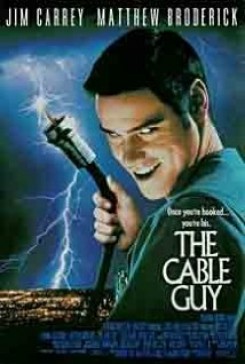 Cable Guy is a film about a loony cable installer who stalks his customers. The Cable Guy's newest customer is Steven, who recently moved out of the apartment he shared with his girlfriend. Steven is going through the broken heart syndrome when he meets the Cable Guy. The Cable Guy is so obnoxious and forward that Steven does not know how to tell him "No" when he asks if he would like to hang out sometime. When Steven nonchalantly agrees in an attempt to get rid of the guy, Cable Guy takes him seriously and picks him up the next night for a boy's night out. The harassment does not stop there. The Cable Guy starts calling Steven at work as well as at home. He even breaks into Steven's apartment and installs a big screen T.V. complete with a sound system. On one of their outings, Cable Guy takes Steven to a Medieval Times restaurant where they have jousting contests. Cable Guy who is a regular customer, convinces the owner to let him and Steven joust. During the contest, Cable Guy trys to hurt Steven and Steven finally begins to realize that this guy is out of touch with reality. When Robin, his girlfriend, comes back into his life, Steven informs Cable Guy that he does not have time to be his friend anymore. The cable installer goes ballistic. If Steven thought he had been stalked before, it is nothing compared to what he is about to experience.

When the Cable Guy takes Steven to the Medieval Times restaurant they first watch an act performed for the audience. Six horses are seen, three on each side. The men on horseback go to opposite ends of the arena and charge at each other with their spears held in the air. A knight is seen clashing swords with another knight. Then a horse is seen rearing and a man falls off. For this scene a trained rearing horse was used with a stunt-double as the rider. The actual performance with the Medieval Knights were professional riders employed by Medieval Times Dinner Theatre. The jousting scenes were performed by stunt doubles trained in the art of jousting. All jousting props were fake. After the jousting between the restaurant knights, the master of ceremonies calls out Steven and Cable Guy's name and instructs them to come into the arena. They are to fight out a grievance that the Cable Guy believes is going on between the two of them. The grievance is the fact that Steven wants to stop the friendship. Since Cable Guy installed all of the knight's cable for them, he had asked if he and Steven could joust to settle their misunderstanding. Steven and Cable Guy, who meet in the arena in full armor, are to fight to the death. After fighting on the ground, they are given horses and told to mount. Cable Guy is seen riding out of a tunnel as he enters the arena. Steven is hesitant about this aspect of the game, so the master of ceremonies helps him mount his horse and then slaps the animal on the rump as he takes off running. The two men charge at each other and Steven knocks Cable Guy off of his horse with his jousting spear. This scene was shot in cuts. When Cable Guy is seen riding out of the tunnel, the stunt-double rode the horse for the establishing shot and then rode out of camera range. The actor was on the horse for the close up shots. When Steven is seen mounting his horse, the actor merely mounted the animal and the master of ceremonies simulated the act of slapping the horse on the rear. A wrangler was actually off camera holding the reins and led the horse away as the slap supposedly occurred. As the two actors are seen charging at each other with jousting spears, it is actually two stunt-doubles using a break-away jousting spear. The horses and the jousting spear never make contact with each other. When Cable Guy is seen falling off of his horse, the stunt-double was actually hooked up to a crane that lifted him up and away from the animal. Other animal action consists of a short scene where a spider is seen crawling on Cable Guys face.