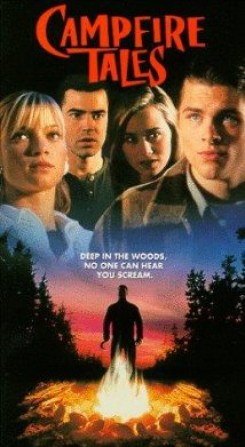 Campfire Tales is a film about Cliff and three of his friends who are driving back from a concert when they have an accident. They find themselves in the middle of no-where and so they take shelter in an abandoned chapel. With nothing to do while they wait for help, the teens start telling ghost stories, thoroughly scaring each other. After a while Cliff sees a light and goes to check and see if it is help. Upon his return to the chapel, he finds his friends gone, leaving Cliff confused and bewildered.

One of the ghost stories told is about a little girl named Amanda and her dog Odin, and the killer who breaks into her home. The dog is seen walking A to B from room to room with the actor, playing in the backyard, licking the actor's finger from under a bed, and crawling though a doggy door. After the man enters the house the dog is found under Amanda's bed dead. The trainer used verbal and hand commands to cue the dog with food as a reward. To get the dog to lick the actor's fingers, the trainer applied baby food to the fingers. For the shot of the dog lying dead under the bed, a fake dog was used with prop blood.