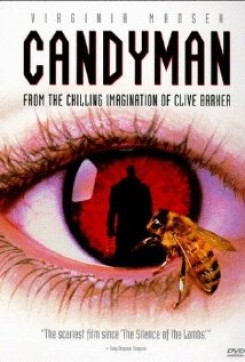 Candyman is a genuinely scary horror film with an intriguing and believable plot that supplies a generous amount of suspense and terrifying thrills. The film's heroine is Helen, a doctoral candidate and the wife of a college professor. For her thesis she's selected urban folklore, legends, and superstitions. Together with another woman she enthusiastically launches into her research which takes her into a degenerated ghetto housing project where a vicious unsolved murder was committed. Ghetto residents believe the murderer to be Candyman, a mythological serial-killer who has committed more than twenty murders. Helen learns that the mythic Candyman had been an educated son of a slave who was put to death by having his hand cut off and throwing him to a massive swarm of bees as revenge for impregnating a wealthy young white woman. Legend has it that Candyman can be summoned by repeating his name more than four times while looking in a mirror. Her enthusiasm and dedication for the subject matter put Helen at the kidnapping and subsequent murder of the baby of a ghetto resident which lands Helen in police custody. As the plot unfolds there are numerous bloody and violent confrontations with Candyman and his victims.

As the film begins, thousands of swarming bees fill the screen. This scene was accomplished via the use of optical special effects. Added to the special effects were a series of closeup shots of real bees. The bee wrangler placed a large number of bees on a wall and queen bee hormone was used to keep the bees in that particular spot. To get the effect of bees exploding towards the camera, a special vacuum was used with a reverse suction. This was superimposed with special effects to give the overall total effect. Real bees were used in several other scenes. In a scene which takes place in a public toilet, Helen discovers a toilet bowl filled to the brim with bees all feeding on something unseen. To achieve the effect, a queen bee scent was applied by a professional bee wrangler to the inside of the toilet bowl. This wrangler released the bees from the hive into the toilet which had no water in the bowl and was not a functional toilet. Vaseline was applied to the upper inside of the bowl to prevent bees crawling up near the lid. After the scene was filmed the bees were collected with the special soft, safe, gentle vacuum and returned to the hive. For a scene in which both Helen and Candyman are covered with bees, the queen bee scent was placed on the actors and then the bees were placed on the actors by pouring them out of a container. A special bee vacuum was used after to collect the bees. For a scene in which bees fill Candyman's chest cavity, bees were placed in a special body appliance which was filled off stage and strapped to the actor. Utmost care was taken to be gentle in placing the bees properly for the scene and then collecting them afterwards. Very young bees were used when placed on the actress as the young bees were unlikely to fly or sting. In other animal action, a Rottweiler barks at Helen as she takes pictures inside the ghetto tenement. The dog is held on a leash by the actress and barks in response to his trainers cues. In a later scene the same dog has supposedly been killed and decapitated with a meat cleaver and the head of the dog is seen lying on a kitchen floor amid a puddle of blood. The decapitated head was a lifelike fake rubber model. The blood was, of course, fake stage blood.