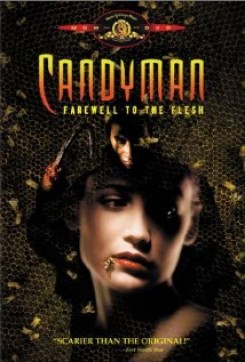 Candyman 2: Farewell To The Flesh

Candyman 2: Farewell to the Flesh is a present day thriller set in New Orleans during the Mardi Gras Carnival. We quickly learn that "carnival" means farewell to flesh. Annie's brother, Ben, accused of a string of murders, discovers he believes the mythical Candyman lives and is also responsible for their father's death. After much research, Annie learns that the Candyman was Daniel Robitaille, a slave man's son, and an artist by trade, who, in 1890 was commissioned to paint a portrait of Caroline, a wealthy white woman with whom he fell in love. After learning of Caroline's pregnancy, her father calls out his thugs to chase Daniel through town, where they brutally mutilate him, cut his hand off, and cover his body with honey from a nearby beehive. The bees ultimately kill him. According to the myth, the Candyman's soul escaped into Caroline's hand mirror so that anytime during the Mardi Gras carnival he can be summoned by looking into any mirror and calling his name out loud five times. He appears, accompanied by bees, and kills all who he comes in contact with, using a hook for his hand which was previously cut off. The only way to release Daniel's soul is to break Caroline's hand mirror, but it was never found. The myth becomes a reality when not only are Annie's husband, Paul, but also her brother and mother, mutilated by the Candyman. Annie learns that the Candyman is obsessed with her. It seems that the Candyman's lover, Caroline was Annie's great grandmother, meaning that Annie and the Candyman were blood relatives. He wanted only to take care of Annie and her unborn child which he had been unable to do with Caroline. This meant that he would, of course, have to murder Annie in the same way as the others.

At the beginning of the film the title Candyman 2 is covered with bees. This was accomplished by the beekeeper spreading honey on the titles and then releasing the bees, who were attracted to the honey. A special vacuum for bees was used in order to gently recover them without harming them. In one scene in a dilapidated old house where Annie and her family had previously lived, a raven startled Paul by swooping down over his head as he entered one of the rooms. In reality, the trainer stood next to the camera and released the raven while another handler on the other side lured it with food. In another scene Annie and Matthew, one of the students in her classroom, hear a buzzing sound which grows louder. It is the sound of a bee which has landed on a window in the classroom. It repeatedly flies against the window pane as if trying to get inside. After a few more attempts the bee collapses on the window sill, dead. This scene was accomplished by putting a Queen Bee's scent on the window to attract the bee, then a harmless lubricant was spread on the window so that the bee would slide down. For the close-up of the bee dead, a real dead bee that had died naturally was used. In a scene near Matthew's house, Anne walks to a car and sees some kids giggling and poking sticks at a dead cat lying in a muddy puddle. A taxidermied cat with make up was used for this scene. Throughout the film, we see flashbacks of the real Daniel Robitaille being beaten, mutilated and covered with bees. There's a close-up of Daniel's face, covered with bees. We then see him open his mouth to scream and bees fly out. In actuality, the bees crawled out of a prosthetic face placed over the actor's face. Throughout the movie, after each murdered victim is gouged with the Candyman's hook, they instantly become covered with swarms of bees, exactly in the same manner as the Candyman was. Baby bees only a day old were used, as they cannot fly or sting at that young age. The beekeeper gently placed them on the actor's body and then gently vacuumed up the baby bees as he had done with the bees in the opening credits.