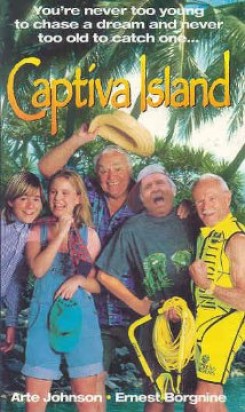 Captiva Island is about Jeremy Chiles, a thirteen year old boy who comes from a very wealthy family of work-aholics. Jeremy has dreams of spending his summer break on Captiva Island in Florida, then going to flight school to prepare himself to be a pilot. Unfortunately for Jeremy, his father, Richard, has other plans for him. He wants him to go to Thomas Academy during summer school to prepare himself for the family business. After a lengthy discussion with his father at the office, they finally agree on one week in Florida and the rest of the summer at the Academy. At least that's what his dad thinks they agreed to. Jeremy, however, has other plans once he gets to the island. When Jeremy arrives on the island, there is a driver waiting to take him to the hotel of his dad's choice. But Jeremy decides he would like to take a cab ride, so he by-passes the driver, going for an old Cadilac marked "cab." On closer inspection Jeremy notices that the driver is a girl. When she takes off her hat, he sees that she is not only a girl but a beautiful one at that. She introduces herself as Sam and asks him where he would like to go. After Jeremy tells her the story of his father and the different summers they have planned for him, she takes him to her grandfather's place and offers to let him stay with them. He accepts and Jeremy finds out that his summer adventure is just beginning.

Sam and Jeremy stop on their way to her grandfather's to inspect her crab traps. Sam pulls the trap out of the water and takes three crabs out with a pair of thongs and shows them to Jeremy. She then replaces the crabs back into the trap. There are several scenes where we see a pelican sitting on a perch. The pelican that was used in this film came from the Care and Rehabilitation Of Wildlife in Florida, an organization for the rescue and care of injured wildlife. The bird had been rescued five years earlier after having been found shot. A representative from the organization was on the set at all times when the pelican was used. In several scenes a golden retriever is seen with T.J., a friend of Sam's and owner of the cab. The dog is either on T.J.'s docked boat or in the cab. There is one scene when T.J. takes the kids out on his boat looking for a buried treasure and a storm starts. The dog is on the boat but is never seen during the time of the storm. The dog was the personal pet of the cameraman and just obeyed the instructions of his owner.