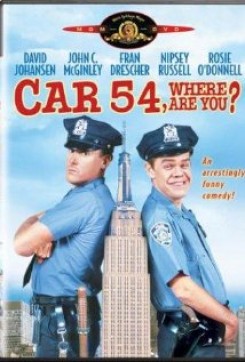 Car 54, Where Are You is a zany spin-off of the television series from the sixties. Officer Gunther Tootie and his old partner Leo, played by Al Lewis, are still fighting crime in Brooklyn in a bumbling fashion. Leo is transferred to a desk job and Rookie Officer Francis Muldoon is assigned as Tootie's new partner. Muldoon tends to be a bit over zealous in fighting "crime" in the neighborhood - the exact opposite of Officer Tootie. When a young boy steals a pastrami sandwich, Muldoon tries to shoot him, fortunately missing, as Tootie simply pays the sandwich shop owner for the sandwich. In the meantime, the District Attorney sends his key witness, Herbert Horst, a former bookkeeper for mobster Don Motti, to the 53rd Precinct for protection. Several attempts on his life in jail are unsuccessful, but to be on the safe side, Captain Anderson stashes Horst in the trunk of Tootie's car. Being the bumbling cop that he is, Tootie, after a night on the town with his wife, forgets that Horst is in the trunk. Three prositutes steal his car and wind up in Coney Island. The madame recognizes him and calls Don Motti and the boys. Tootie poses as Detroit Dan, the hitman sent to kill Horst, as the chase is on in the most exciting scene of the movie.

Animal action is minimal. In one of the opening scenes, a cat stares up at an animated bird in a tree. Later, during a riot, we see two policemen on horseback in the background. There was no danger to the horses at all. In another scene, a seeing-eye dog and his companion receive a ticket for jaywalking. Muldoon and his girlfriend take a ride in a horse-drawn carriage through Central Park. Stock footage was used for one scene of some sea lions in their natural habitat.