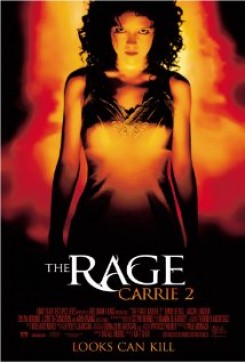 Carrie 2 is a film about a young woman who has telekinesis. She can't control this power and a teacher at her school tries to help her. She begins to trust the teacher and a young man who cares for her very much. His friends decide he should not date her and play a very mean trick on them to break them up.

There are several scenes where a basset hound is lying on a couch, sleeping in a bed, jumping down from a bed, and barking at a boy. For all of these scenes, the trainer place the dog on its mark and cued it with verbal and hand commands. In another scene, the dog is in the street and car comes to a screeching halt just missing him. Unfortunately, seconds later a truck comes by and hits him and he is lying in the street yelping when a girl picks him up. This scene was shot in cuts. The trainer placed the dog on its mark and cued him with verbal and hand commands. After the accident the dog leaves a veterinarian's office with a neck collar and several bandages on. The dog was gently wrapped in bandages that were removed immediately after the shot was complete. Other animal action consists of an aquarium containing fish.