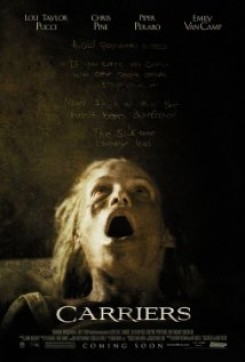 As an airborne virus is killing much of the human race, four friends drive cross-country hoping to make it to their secluded beach house, where they plan to hide out until the pandemic ends. Along the way, they face vigilantes, contagious disease carriers and perhaps the most dangerous obstacle of all: each other.

Several birds are seen fluttering around in a pet shop as the friends' vehicle drives by outside. A custom-made bird enclosure with perches and wooden ends was built and placed inside the secured pet shop set. Trainers placed several birds in the enclosure by hand and enticed them to move and fly by tapping the enclosure. After this brief action of the birds flying freely, trainers carefully moved the birds one at a time and placed them back in their regular cages.

The seagulls and birds seen on the beach and in the sky were filmed naturally in their own habitat.

Neighing is heard from a horse trailer outside of a motel. A horse's eyes are seen close up through the slits in the trailer. For this scene, two horses were placed inside a horse trailer and lead ropes were tied to their halters. Horse wranglers stood off-camera during this very brief and mild action.

Danny (Lou Taylor Pucci) sees a dog on a bed eating the body of a dead person. The dog looks at Danny, growls and shows its teeth, and then lunges off the bed and onto Danny, biting his shotgun. After Danny and the dog briefly wrestle, the dog takes a couple steps toward Danny, who aims his gun and appears to shoot. This scene was filmed in separate shots. A prop dummy's hollowed-out abdomen was stuffed with baby food and hamburger. Trainers placed the dog on top of the dummy. The well-trained dog was cued to eat freely and then to look at the off-screen trainer and growl and snarl. A second dog was brought in and cued to jump onto Danny's stunt double and bite the rubber gun prop. A third dog was brought in for the wrestling portion of the scene. This dog was muzzled and cued to play with the stunt double and the gun. The trainer and stunt double choreographed the wrestling and the grabbing of the gun, making it appear as if Danny pushed the dog off him. No real gun was ever aimed or shot at the dog. The gunfire and the dog whining were sound effects.

Due to late notification or limited resources, American Humane did not monitor any of the cockroach action.