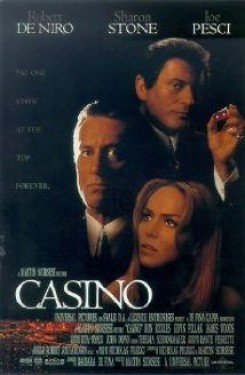 Casino, a drama set in Las Vegas between 1970 to 1980, is about Ace Rothstein, a genius at gambling, and the last wise guy around since Bugsy Siegel. The mid-west crime boss's set him up in Vegas to run the casino, Tangiers. The film tells about greed for money, drugs, and power and how it changes peoples lives. Everything is going great until the mob sends out Nicky Santoro, a mob guard, and Ace's best-friend since childhood. Ace is nervous about Nicky staying in Vegas because he has a habit of using more brawn than brains to solve a problem. What starts out as a paradise for them all, ends up being a nightmare of killings because of a few envious and greedy people.

The animal action was minimal consisting of one scene in front of the casino. A leopard and tiger are shown arriving with their owners for the show that evening. They are the property of Ziegfield and Roy, well known entertainers in the Las Vegas area.