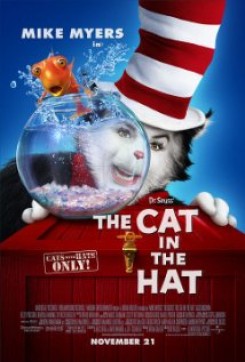 Cat In The Hat

Mike Myers hams it up in the title role of this high-velocity live action film that brings the kooky brilliance of Dr. Seuss' most popular storybook to the silver screen for the first time. The mayhem begins one rainy day when an exasperated Mrs. Walden (Kelly Preston) tells her children Conrad and Sally (Spencer Breslin and Dakota Fanning) not to leave the house, make a mess, or misbehave in any way while she's at work. Try though they might, Conrad and Sally's honorable intentions fly out the window when a giant talking feline turns up to teach these kids "it's good to have fun—but you have to know how!

The film used four different dogs to play the part of Nevins, the Walden's spunky terrier mix. Though not identical, a clever application of non-toxic powdered make up made the dogs look alike. Trainers rescued three of the mutts — Scamp, Tuffy and Short — from animal shelters and they made their big screen debut in "Cat in the Hat". No stranger to the entertainment world, the fourth dog Bugsy has performed in numerous films, including "The Big Lebowski" and "The Brady Bunch Movie", as well as a variety of television sitcoms and commercials. To create Nevins' curious hairdo, the props department created a special hair extension attached with an elastic band tied loosely and comfortably under the dogs' chins. Before filming began, the actors met the dogs and had lots of prep time to get comfortable with their furry co-stars. Also, the younger actors received special instructions on handling the dogs.

Nevins appears in several scenes with the children, Cat and other people. At times he does some minor action in the background and other times he just follows an actor around. All of these types of scenes were filmed ahead of time and inserted into the film during post production. One trainer would put the dog on its mark while another stood near the camera using both verbal cues and hand signals get the dog to look or walk in a certain direction. Each of the actors and the director kept a pocketful of doggie treats at all times, much to the canines' delight. Also, whenever the script called for Nevins to lick something, trainers smeared baby food on the subject to entice the dog.

Anytime the dog walked outdoors, trainers always checked the grounds before filming to make sure the area remained clear of all debris and was safe and comfortable for the dog to walk on. In some scenes it looks like Cat's gloved hands pick up the dog to move him around; in reality, a trainer always moved the dog.

In a particularly fanciful scene, the dog spins on the heads of Thing 1 and Thing 2. To achieve this, each Thing stood on a turntable slowly rotated by an unseen trainer while the actor playing Thing held the dog over his head. This was filmed separately with each Thing in front of a green screen, and the Things appeared to turn much faster in the movie because those post production magicians sped up the film.

Later, Thing 1 and Thing 2 toss the dog out the window like a football and Nevins run through the yard and down the street. Trainers made a strong, specially fitted harness for the dog in order to keep him comfortable and safe. The harness, attached to an unseen cable, made it seem as though the dog flew through the air. A trainer placed the dog in the harness and then stood off camera controlling the speed of the dog's flight. This canine daredevil showed absolutely no signs of stress and appeared to love his simulated flight. After the dog went through the window, another trainer stood off camera to take him down from the cable. For obvious safety reasons, the director filmed this scene in front of a green screen with the camera positioned on a steady cam at street level on top of a cart. The cart then moved in front of the dog as he ran down the street to an awaiting trainer. Crew members cleared the street of traffic and everyone remained alert and cautious while the dog ran by.

The scene continues with Nevins running past his dog house, now occupied by another canine tenant. A trainer placed a cute little Pug named Moo Shoo inside the house and stood off camera using hand signals to get the dog to stay. Moo Shoo is no stranger to the big screen after his noteworthy performance in "Men in Black 2". To get Nevins to run, one trainer put the dog on its mark and another one stood holding his favorite toy and treat. The dog ran past his abode aware of nothing but the rewards that awaited him.

Nevins attends a birthday party and jumps up to inspect the food table, later making off with a hot dog. An empty carpeted apple crate placed next to the table allowed the dog to get on it easily and safely, and mats placed around the table provided additional safety cushioning. The food placement around the table left plenty of room for the dog to get on, and a trainer standing on the other side of the table used a combination of verbal cues and hand signals to get the dog to perform the action. Another trainer stood off camera and called the dog over to him. As soon as the director yelled "cut", Nevins scarfed down the hot dog.

A few times in the film, Nevins rides in neighbor Lawrence Quinn's (Alec Baldwin) car. In one instance, Larry has a box of tacos sitting on the seat and Nevins lifts his leg and pees on it. To accomplish this less-than-tasteful scene, a trainer hid in the backseat of the car at all times, even when the car was parked. From the backseat, the trainer verbally cued the dog to lift its leg. A thin, lightweight wire rested on the dog's back and held a small plastic tube in place. In order to hide the wire from the camera's eye, groomers brushed up the dog's hair. A plastic tube was strategically placed and a crew member stood off camera controlling water flow through the tube to make it appear as though the dog actually urinated on the taco. During a party scene at the end of the film, Nevins again lifts his leg and urinates on cupcakes sitting on a table. Filmmakers used the same techniques mentioned above to achieve this action.

Conrad holds Nevins as he runs into a crowded festival. Still clutching the dog, Conrad stumbles and falls to the ground. The dog and young actor had lots of prep time before filming began so they felt comfortable with each other. A trainer handed Nevins to the actor right before the cameras rolled and the boy moved quickly but cautiously across the plaza while holding the dog securely. The trainer then retrieved the dog from the actor and replaced it with a stuffed dog made to look just like Nevins.

In one fantastic scene the kids take a ride atop the babysitter, who has transformed into an amusement park ride. The props department made a wonderful life-like replica of the babysitter for this scene, and the ride was suspended on cables and controlled by a crewmember off camera. This was filmed in front of a green screen with lots of prep work beforehand. During the ride, Sally holds Nevins in her lap; the props masters alternated a real and stuffed dog for this scene.

Purple goo showers Nevins and he lands in the babysitter's lap, who has returned to her human form. Scamp the pooch appeared in this scene and his trainer actually dropped him onto a cushioned mat from a very short distance. Post production added in the babysitter later. Made of methylcellulose, the purple goo is absolutely harmless to the animal. The dog became used to wearing it for short periods of time as trainers prepped the animal months before filming began. In another scene that takes place in the kitchen, the oven explodes and purple goo spews all over the room and onto the dog, who licks up some goo from the floor. This particular goo consisted of baby food, water and food coloring, and the dog seemed to really enjoy this combination.

The dog goes into Cat's special machine and comes out clean. The director filmed this sequence in front of a green screen, and the trainer wore green gloves in order to facilitate the editing out of his hands later. A large cardboard box had a hole cut into it big enough for the dog to fit through comfortably, and the gloved trainer lifted the dog into the hole in the box. Another trainer guided the dog through and retrieved it afterwards.

In one scene, Cat, dressed as a matador, opens the front door and sees a bull standing outside. The bull begins to charge and Cat quickly closes the door. As Cat and the children quiver nervously on the other side, the bull's horns pierce the door. Before filming began, crew members cleared the set and several trainers inspected the ground to make it debris-free and comfortable for the bull to walk on. Two mounted wranglers cracking bull whips in the air and on the ground positioned the bull on its mark and got it to move in the direction the director wanted, while two other trainers stood near the camera and tried to encourage the bull to walk forward. The actor's part in this scene was filmed separately, so although it appeared as though the bull charged him at the door, the bull actually charged at an unseen trainer. The actors stayed away from the set for this scene and were later inserted by the geniuses in post production. Incidentally, the props department crafted the bull horns that crash through the closed door.

Although a computer generated goldfish splashes about through most of the film, a few shots show a real goldfish swimming around in a bowl. Occasionally a rubber fish stood in for a few shots. An aquarium supply store provided and maintained the fish, bowl and the aquarium that housed the fish when it was not working.

As Cat rocks in a swing a unicorn grazes behind him in the background. Not to ruin the magic, but a white horse actually played this part. The prop department constructed a plastic light weight horn and a trainer fastened it to the horse with an elastic tie that fit comfortably around the animal's neck. Handlers scattered some food on the ground before filming began and the horse appears completely content.