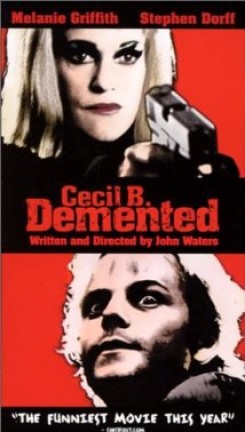 In this comedy we meet Cecil B. Demented, a director of low budget films that never go anywhere. He enlists the help of his crew, to kidnap one of the hottest talents on the screen and forces her to star in his next film.

Gerbil Action A gerbil appeared during a porn movie that is shown on television. A woman lying on the bed takes the gerbil from the cage, holds and kisses it. She drops the gerbil below screen and we see it scurry under the covers and it comes out and sits up. Three gerbils were purchased at a pet center by the production. During the filming, they alternated the gerbils. When not on camera, the animals were kept in comfortable cages that were transportable. Once the scene was completed, one of the crew members adopted the three rodents and brought them home to his daughter. Cat Action A movie is being shown at a drive-in during one scene and on the screen we see a woman lying on a bed next to a cat. She picks the cat up and holds it. Later the cat runs out the pet door. The trainer placed the cat on its mark near the woman and it laid patiently while basking in the attention. The actor picked up the cat and held it in her arms, stroking it. The trainer stood nearby, un-noticed by the cat. The actor set the cat down and the trainer waited on the other side of the pet dog with a treat. The cat couldn't get out the pet door quick enough.