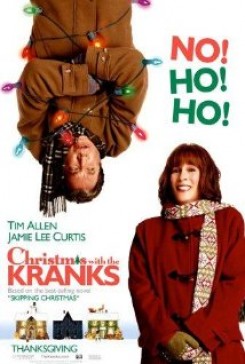 Christmas With The Kranks

This film adaptation of John Grisham's best-selling novel Skipping Christmas stars Tim Allen as Luther Krank, a husband and father who decides to forego the traditional yuletide trappings and plans a romantic Caribbean cruise instead. His neighbors, pumped up with extreme holiday spirit, refuse to accept this "selfish" attitude and band together to coerce some Christmas cheer out of the Kranks — whether they like it or not.

In two separate scenes, Krank accidentally steps on the tail of Muffles, the white Persian cat belonging to neighbors Beverly and Walt Scheel. To achieve this action safely, Allen wore special shoes modified with cut-outs on the soles so that the shoe fit over the cat's tail without actually touching it. The conscientious actor was mindful of his foot placement and did not put his full weight down on that foot.

In one scene, Krank sprays Muffles while hosing down the sidewalk to make it slippery for trespassers. In the next shot, the pampered Persian appears frozen solid on the lawn. To accomplish this scene, trainers positioned the cat on mark and verbally cued it to stay and give looks. A crew member standing at the camera sprayed a fine mist with a hose, letting only the outer edge of the water touch the cat. Trainers then used a buzzer to call the animal out of frame and gave the kitty a food reward. The frozen feline was actually a puppet whose blinking eyes came courtesy of computer-generated imagery.

American Humane's Animal Safety Representative on the set discussed this shot with the trainer beforehand to ensure the cat would not be soaked with the hose. Production alternated two Persians for this scene; the cats weren't bothered by the water and readily returned to mark after each take.