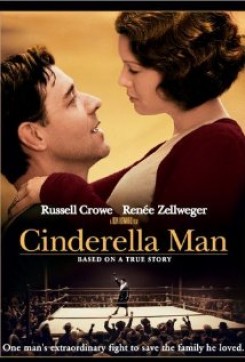 Ron Howard's Cinderella Man is a poignant drama inspired by the true story of boxer Jim Braddock's fairytale rise to fame in the 1930s. Braddock became the heavyweight champion of the world after beating Max Baer in a 1935 fight that had him pegged as a 10-to-1 underdog.

A scene in the town of Hooverville shows an overturned wagon, and the horse lying beside it appears to be dead. Meanwhile, a few sheep are seen grazing in the background. Production provided documentation for the fake horse used for this shot. The sheep were kept in an area surrounded by portable fencing until the cameras began to roll. The trainer then removed the temporary barricade and the sheep grazed on food scattered on the ground.

The turtles seen in one brief shot were provided and maintained by a local pet store.

Trainers doubled as the actors for a few scenes featuring policemen on horseback.