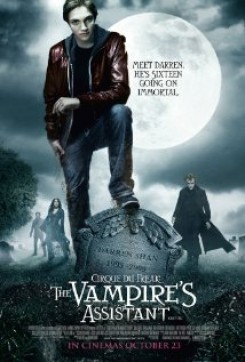 When two young men are lured into an underground world of freak show acts, one of them discovers a vampire among the acts and decides he wants to join the adventure, becoming a vampire and living with the "Cirque du Freak".

Evra the Snake Boy (Patrick Fugit) appears with a snake around his shoulders and dances during a freak show performance. The snake lunges at an audience member, and then as it is set on the floor, begins to eat a remote control. A real snake was used for the beginning of this scene and the rest of it was computer-generated imagery (CGI). The actor was instructed on handling the snake before filming began. The set was secured and checked for hazards before filming and the number of cast and crew members allowed on set were limited. The scene was filmed in separate shots. A wrangler placed the snake on the actor's shoulders and stood just off-camera. The actor was then filmed taking the snake off his shoulders and placing it on the floor. The rest of the scene (including the dancing) was filmed with a combination of a rubber snake and CGI snake.

In a few scenes in Evra's tent, a snake in a cage is seen in the background. After the cage was inspected and prepared to make the snake comfortable, the wrangler placed the snake in the cage. Once inside, the snake did whatever came naturally.

In a couple of scenes, some chickens walk around in the background. Trainers placed the chickens on their marks after the grounds were checked for hazards and chicken food was scattered around for them to eat.

In one brief scene, some rats crawl around. The production provided documentation that the rats were computer-generated.

American Humane also monitored a scene with pigs riding in the back of a pickup truck and a man appearing to eat one alive. This scene did not appear in the theatrical release but might appear in the DVD release.