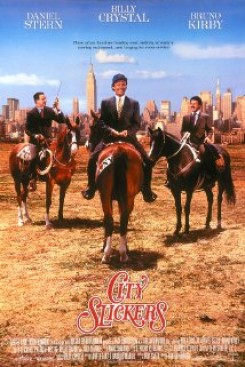 City Slickers is a comedy about a trio of best buddies who decide to work through their mid-life crises, and perhaps find a bit of their lost youth, by sharing a unique adventure-vacation. They leave their respective spouses at home in the East and head for a dude ranch in the Southwest where they are joined by other cowboy wannabes. The motley assemblage of green-horns embark on a cattle drive from Santa Fe, New Mexico to Colorado, with two hundred head of cattle. The trio look forward to a light-hearted adventure until they meet their terrifying trail-boss, an alleged killer, and they tangle with a couple of menacing cowhands. There's rough going ahead when, after a series of incidents, the city slickers find themselves stranded in the middle of rugged, remote terrain with two hundred head of cattle and no trail boss or wranglers. They meet their predicament head on and in the process learn much about friendship, life and themselves.

There's intense animal action throughout this film. On a former thrill-seeking vacation in Pamplona Spain, the buddies run with the bulls. This scene was filmed in cuts and the bulls merely ran out after a gate was opened. The bulls ran a short distance each time and with post-production editing, the run is made to appear longer on film. During one take a bull accidently slipped, as seen on camera. He did not fall and was not injured. Our representative inspected the bulls after each run and none were injured. The balance of the animal action involves the storyline of the cattle drive. American Humane had a representative on set at all times during these scenes that were filmed on the actual locales in Colorado and New Mexico. Our representatives saw to it that the animals had proper housing, rest periods, water breaks, shade, veterinary care, etc., and our reps closely monitored the use of the calves. Because the filming took place over many weeks, several sets of calves were used in order to maintain the proper size and age for the story. When the loud sound of a battery-powered coffee grinder frightens the cattle, they stampede through the campsite knocking over wagons, people and anything else in their way. This scene was shot in cuts over a period of days using many different camera angles and constantly changing the cattle so as not to tire them.. The objects that fell over were all rigged with hidden pulleys so that when the cattle approached a wagon, tent, etc., special effects would pull the object over with the cattle never actually coming in contact with the object. The cattle were guided into the proper areas with the use of portable pipe corrals. Tin cans were placed inside cloth sacks and shaken causing a noise that would start the cattle moving from one desired point to another. In a poignant scene where a cow gives birth to a calf, both a real and fake cow were used. A real cow lying on her side was filmed in a medium distance shot. Then, in extreme close-up, a fake cow, designed by special effects, was used. A non-toxic gel was applied to a six-day-old calf, then the character Mitch pulled the calf out of the fake cow. (Mitch forms a special bonding with this calf, whom he names Norman). This scene was accomplished in one take. The young calf was kept warm with blankets and heaters and bottle fed. In a scene where two horses run over a cliff with a wagon, the horses were never in any danger of going over the cliff. The wagon goes over by way of a pulley and the horses were not there when that was filmed as the scene was shot in cuts. After they're deserted, the city slickers must herd the cattle across a river during a thunder storm. The "rain" was movie rain that could be controlled, as was the swiftness and depth of the river, which could be lowered by a damn keeper. The lightning and thunder were, of course, special effects. Any objects appearing to fall close to animals were carefully controlled. Before entering the river, horses and cattle had to move down a steep, muddy embankment. The horses were ridden by expert riders. A stock fence covered with plastic was built on both sides of the incline to keep the cattle together. The cattle actually swam across the river. A line was stretched across the river, out of camera range, and men in wet suits were positioned as a precaution in case any cattle had problems, but there were none. Where a horse and rider appear to take a bad fall in the river, a stuntman and trained falling horse did the fall at the water's edge. The ground was properly prepared and camera angles and editing made it appear as if they were in deeper water. Where the calf Norman appears to be drowning and Mitch comes to his rescue, several calves were used to portray the one. A fake puppet calf was used at times such as when Norman is caught in the rapids. Real calves were never alone in the water. In one scene where a real calf appears to be alone, he is wearing a life preserver and harness. A cable was attached to the harness, which was held by his trainer who was standing in front of him just out of camera range. Each calf was permitted just one take. Our representative did not allow the calf to be placed in the water until the camera was ready to roll and the takes were carefully timed. If the sequence was not completed within the time limit, they had to stop and change calves. Immediately, after a take, the calf was thoroughly dried off, placed in an actor's tent, which was heated, and always given a full bottle of milk. Our representative kept a thermometer and stethoscope to carefully monitor temperature, heart rate and lungs. A female wrangler's sole job during filming was to care for the calves, which she did admirably, by bottle feeding them, keeping them warm and dry, sometimes sleeping with them in their stalls, and sometimes caring for the youngest calves in her room at night. After successfully reaching their destination the newly seasoned cowboys learn that the plans for the cattle have been changed. Instead of a continued future at the dude ranch they are to be sold for beef. Suddenly, the reality of where all that meat wrapped in cellophane in the supermarkets comes from hits home. In the final reel, Norman can be seen gazing out the window of Mitch's station wagon as he heads for a life in suburbia.