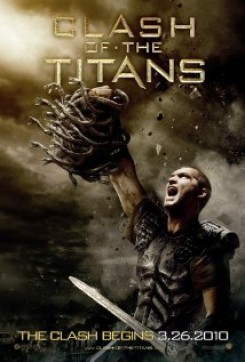 Clash of The Titans

Perseus (Sam Worthington), the half-human son of Zeus, embarks on an adventure to fight the evil kraken and Medusa in order to save the princess Andromeda (Alexa Davalos).

Before filming, all grounds were inspected for hazards and sets were closed off and secured. Cast and crew members were introduced to the animals and instructed on their proper handling. Experienced stunt drivers drove all the moving vehicles in the film and always kept a safe distance from the actors and animals.

An eagle is perched by the side of Zeus' (Liam Neeson) throne in several scenes. A trainer placed the bird on the perch. A safety jess was attached to the bird and fastened to a swivel behind the throne to allow the bird to move comfortably. The bird was filmed on the perch doing whatever came naturally, even falling asleep in some scenes. A trainer stood just off-camera. The bird seen flying in a few scenes was computer-generated, not a live bird.

A snake is seen around Athena's (Izabella Miko) neck, on a nearby perch or coiled up on the floor near her feet. These scenes were all achieved in the same manner. A trainer placed the snake on its mark and stood just off-camera to retrieve it afterward. The actress was instructed on handling the snake and had lots of rehearsal time with the snake and wrangler.

A real horse was used for shots of Pegasus as it walked, ran (with and without riders), and was mounted and dismounted. The wings of the horse and all flying scenes were computer-generated. All horseback riders were stunt riders or experienced actors who were skilled at riding, mounting and dismounting. Before touching a horse, the actors were instructed on proper handling. All horse scenes, especially the crowd scenes, were well-choreographed, and actors used caution while on and near animals. Falling debris seen around the horse in one scene was made of lightweight material and was kept a safe distance from the animal. For shots of Pegasus rearing and pawing its hoof on the beach sand, these were trained behaviors.

For scenes in which men lead camels by ropes, this was mild action that the actors and animals had been rehearsed for. The terrain was inspected for rocks and hazards, and the items the camels carried on their backs were lightweight and secured by trainers, who doubled as the actors whenever possible.

The fish in the film were computer-generated.