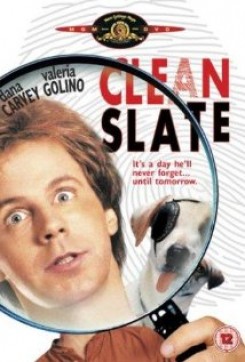 Clean Slate is an action/comedy involving, murder, thievery, love, sex and betrayal. Pougue, a private eye, suffers from amnesia caused by a severe blow to the head after witnessing a violent murder. Unfortunately, his is not the normal amnesia. He starts to remember everything, but once he goes to sleep, he forgets it all again. He begins to realize his dilemma and starts writing notes to himself and leaves them in obvious places before he goes to bed. Unfortunately, by leaving this little paper trail he is putting his life in jeopardy, as this also reveals to the murderers what Pougue remembers and how close he is to finding them. Through a hilarious chain of events we watch as Pougue gradually gets his memory back, catches the murderers and also meets his true love.

Pougue's dog, Baby, is seen throughout in this film, and is indeed one of it's highlights. Baby, whose real name is Barkley, portrays a dog with a seeing disorder and wears an eye patch. The eye patch caused the dog no discomfort and was only on the dog during actual filming, and was removed when not filming. Everything that Baby views is one foot farther away than it actually is. Therefore, throughout the film Baby is seen running into walls instead of going through the door, licking the floor a foot away from his food dish when trying to eat, trying to stick his nose out of the car window for a little breeze and smashing his face up against the window instead, trying to leap into the back of the car and completely missing, trying to lick Pougue's hand and licking at the air a foot away instead, etc. Barkley's signature trick is running into walls nose first. He was trained to do this by running up to the wall and leaning his head into it, not actually smashing into it, thus, not causing any injury to himself. He carries out his little tricks whenever necessary, on cue, and rather enjoys it. After each scene was completed, Barkley received food as a reward. For the scene in which it appears he smashes his face into the car window, Barkley was trained with a push-away window, which he could open by pushing his nose against it, with food as a reward. For filming, the push-away window was replaced with a real window, which could not be pushed open thus, causing this "smashed face" appearance. In one scene Baby, trying to defend his master, leaps at one of the murderers who has entered the house. Baby leaps into the air, completely missing the assailant, and lands in the closet, where upon the man closes the closet door behind the dog. This scene, as with all other scenes involving jumps, was shot in cuts using various camera angles. The dog was filmed from below as he jumped from point A to point B. The dog never actually jumped higher than two feet off the ground. One of Barkley's trainers was hidden in the closet and the dog jumped into the closet upon his trainers verbal commands. In another scene Pougue's blind friend trips over Baby. Baby starts to bark and jumps up and down. In reality, the actor faked the trip over the dog and the dog began to bark in response to the verbal commands of his trainer. The trainer, who was out of camera range, then held a balloon, one of Barkley's favorite toys, over the dog, who jumped up and down trying to get the balloon. Other animal action included one background scene in which a cougar is seen being walked on a leash. This was a tame cougar who was being walked by his trainer. Seagulls are also seen flying in the background at the beach.